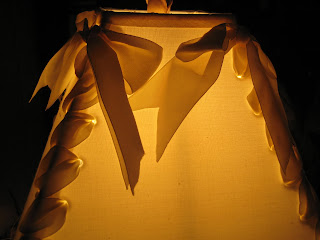 When my three daughters were little, like most people raising kids we were broke a lot. I always bought them pretty quilts and sheets, but never had enough extra money to buy the really pretty accessories I would have liked to have bought them.

Now that I'm a grandma and have money for the extra little "pretties" in life, wouldn't you know that out of five grandchildren only one of them is a girl. Like most boys, the grandsons like wagons and Hot Wheels, not pretty lamps like the one I saw down in Salado a few weeks back. But, since my little granddaughter Lily will be 2 years old soon and loves all things girly-girly and pink, I thought for sure this little lamp would be a perfect present for her room. 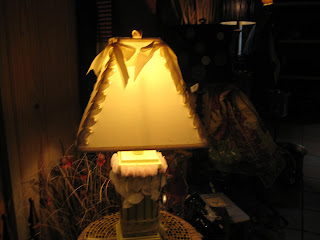 All cream, sage green and pale pink -- I love the ribbons on the shade! But Lily's mama gave the lamp a thumb's down due to the flowers on the base. I tried to convince her that, in person, it's not quite as garish as it might look in pictures, but she wasn't convinced. 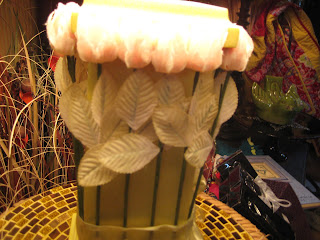 So I emailed a survey to her two sisters to see if they would back me up. No deal, all three daughters gave a thumbs down. I guess it's a generation thing, at least I'm hoping so. Someday in the future I will find a lamp with a wooden base to make over and try to duplicate the look of the lamp...except, just maybe, I'll leave off the flowers. 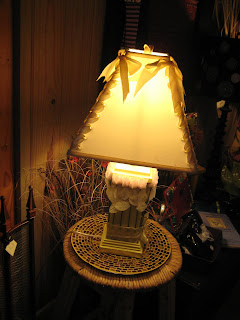 Makes me wish those three girls of mine were still little and happy to welcome a lamp with flowers and ribbons into their rooms.
Posted by At Rivercrest Cottage at Thursday, February 03, 2011

Email ThisBlogThis!Share to TwitterShare to FacebookShare to Pinterest
Labels: A Mile of Style