The Chain Gang Does Rock

A little while back, Gampy and I took a drive to the Rock Farm. That's the place where they grow rock. It grows in piles and they have to put wire mesh around it to keep it growing straight up.

Here's a picture of all the pretty rows of rock growing. 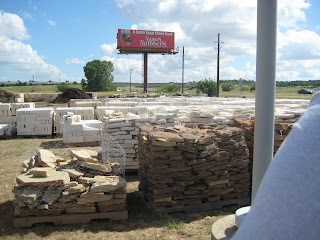 We strolled down the garden path admiring how well the rocks were growing until we spied a patch of rock just right to use to line our mulch beds. After negotiating a deal with the rock farmer for a crop of rocks weighing over a ton and a half, we hurried home to await delivery.

During all that time it never occurred to either of us how much work this was going to be! Once the one and a half tons of rock was delivered on a pallet to the end of our long driveway, we discussed how to move them to the various mulch beds.

Now, I always thought I had good negotiating skills, but somehow I was elected to do the moving of the rocks while Gampy did the "thinking" part of the job. You see, sitting on the ground and placing the rocks in a row somehow requires more intelligence that I appear to have.

So, while Gampy did the hard work and mental strain of lining up those rocks... 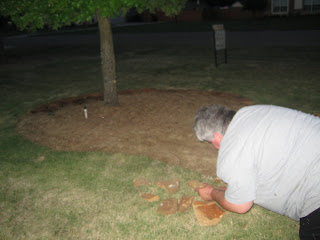 ...I picked up the rocks from the pile, placed them in Pop's little red wagon until it wouldn't hold any more, then hauled ass down the driveway to the concrete closes to each mulch bed, unloaded the rocks by picking each one up and walking them across the grass to the bed and dropping them by the edge of the bed. 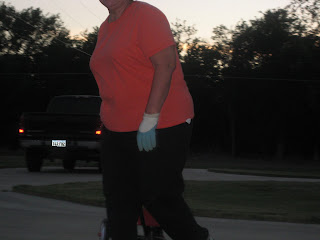 Meanwhile, Gampy was able to lie on the grass and nap between my loads. He needed it because lining up those rocks was just...so...damn...exhausting!

Notice the grass clinging to his butt and back where he was lolling around. I have to admit that while I was tossing the rocks on the ground, a rock or two may have come closer to his body than was called for! "...oooops, sorry Dah-ling!" 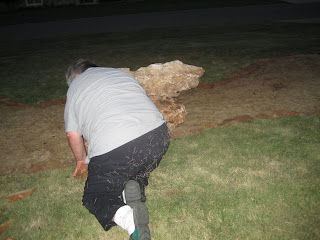 This went on until it got too dark to see any more. One of us was real sore. Care to guess which one? 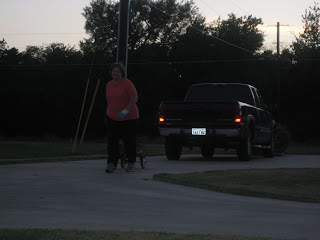 The next night I put my foot down and used the truck, which is what I suggested the first night. We backed the truck up to the rock pile and BOTH of us piled the rocks unto the tailgate and drove them down to the mulch beds.

Here's a shot of one of the mulch beds with the rock. We'll take a better picture after the grass (and Gampy) recover from all the rock hitting it when I off-loaded. 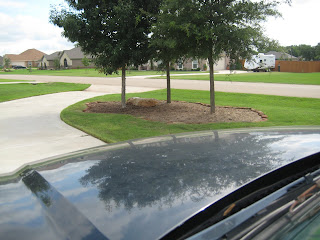 Posted by At Rivercrest Cottage at Wednesday, July 14, 2010