My old friend has a new place in the kitchen. From the smug look on his face, it appears he's happy there. 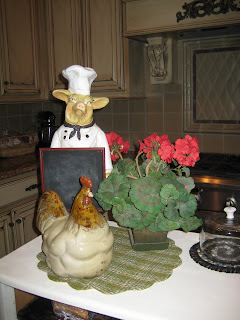 In our old house, he spent his time cooped up in the china hutch with other objects confining him. 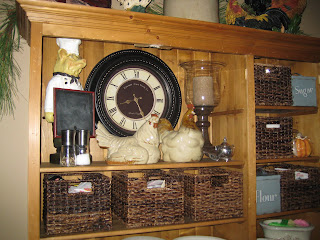 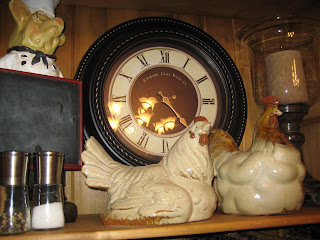 I think he looks much better now that he's got a little more room to stretch out. 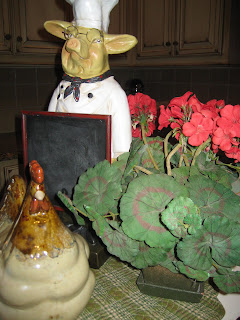 Come back again soon and I'll show you his Halloween costume. The chickens don't dress up, but Mr. Pig does. Thanks for stopping by and come back soon.
Posted by At Rivercrest Cottage at Tuesday, October 25, 2011 7 comments:

We Take A Moment To Bring You This Message...

I feel like I'm writing an advertisement, but here goes...

The best movie I've seen this year is Moneyball, which is about how the Oakland A's put together a winning team without much money.

No, I'm not a fan of baseball. I went to see this movie the first time to take my father-in-law, who is a die hard Rangers fan. I went the second time today, to take my husband, who is not a sports fan either and rarely watches baseball or football on TV, but who loved the movie as much as I did. Neither of us are Brad Pitt fans, but if it were my choice "...the oscar goes to Brad Pitt in Moneyball!"

Not sure who I will take when I go to see it the third time, but I'm sure this is a movie I will buy on DVD.
Posted by At Rivercrest Cottage at Saturday, October 22, 2011 No comments:

Last time I shopped the garage, I painted the bottom of this pair (see Completed Projects No. 6). This time I painted the top. This was an old tin cake cover that I bought for $1.29 a while back at a thrift store. 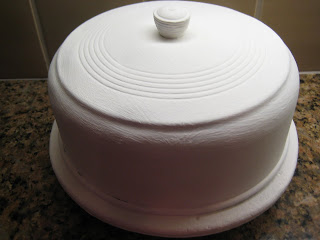 Lately I've been really loving decorating with glass covers and bought this glass set real cheap at the Home Goods store a month ago. I plan to use it on my china cabinet (when I get it painted) as soon as I get my home put together. It's been months since we moved to our new house and I've yet to finish unpacking boxes from the garage. Slow progress as we've been traveling a bit. We even went over to Albuquerque for a week to see the two youngest grand kids when middle daughter and family went to visit youngest daughter and family. 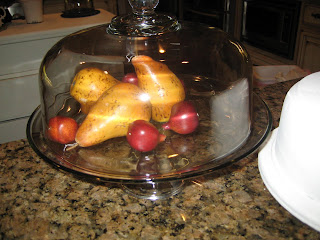 So here's some before pictures to show you how really dented up and ugly it was. I'm sure my husband is wondering why I even spent $1.29 on it and then stored it in the garage. I'm sure he would consider it a waste of good garage space! 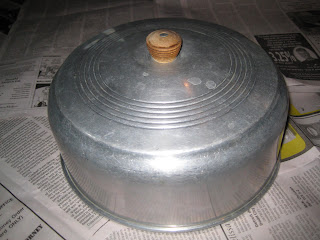 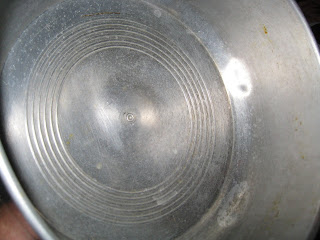 I'm planning on painting the wooden handle black or dark brown, just so when I age it down it will have something to counter the white. 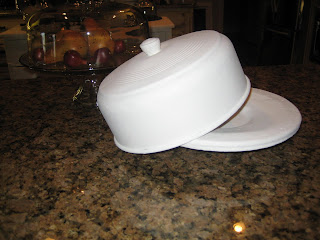 The dishcloth on the left came from Cracker Barrel. I love their dish cloths, which are reasonably priced. These dish cloths are 2 or 3 years old, but have never been used for drying dishes as I love using them for decorating. 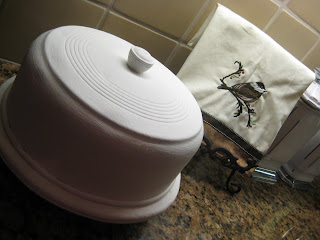 I'll show you soon what I did with the four matching bird dish cloths I have. Hope you have a Cracker Barrel close by to shop at their "country store". Their dumplings are great too if you get tired of shopping. I'm joining "White Wednesday" at Faded Charm's blog party and Perfectly Imperfic's party too. Follow me over to see all the creative things bloggers come up with! You can use the links or click on Faded Charm and Perfectly Imperfect in my blog list on the right side of my blog.
http://fadedcharmcottage.blogspot.com/2011/10/white-wednesday-122.html

http://perfectlyimperfectblog.com
Posted by At Rivercrest Cottage at Tuesday, October 18, 2011 10 comments:

I've been out shopping the garage again. Here's an old yellowish pottery piece I painted with a mixture of gesso and old leftover paint. 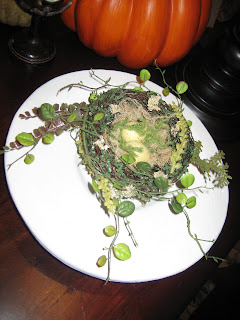 The before picture shows just how ugly it was. 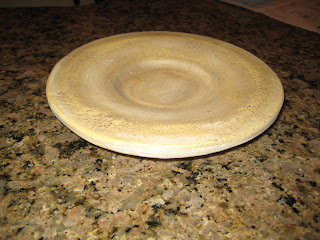 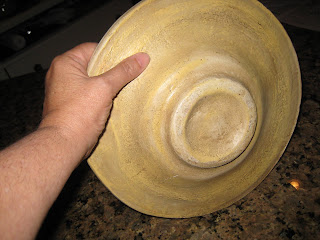 I like the chalky gesso/paint mixture and will age it somewhat after I get a collection of items done. 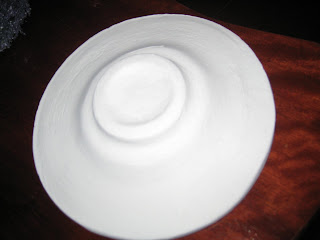 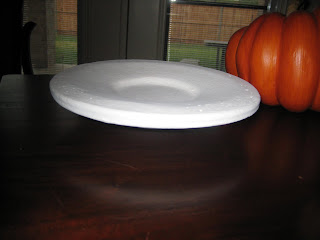 Next time I will show you the matching lid I made for this from an old tin cake cover I bought at a second hand shop for $1.29.
Posted by At Rivercrest Cottage at Monday, October 17, 2011 3 comments: 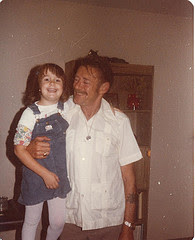 Here's one of my favorite pictures of my father with my oldest daughter during a Thanksgiving visit in 1978. He had just had his lung removed due to cancer. He was only around 54 years old and, thankfully, was lucky to survive another 15 years. He seemed old back then, but as I look at this picture I see him now as a young man... probably due to my being a few years past 60 myself these days.

A few years after this picture was taken, Dad left his garage door open just a foot or so to air it out and forgot to close it that night. The next morning when he went out to his garage, he discovered he had been robbed. The thief only took a few tools, but emptied Dad's freezer of everything except one thing... in the middle of that empty freezer sat one lone frozen turkey!


That sorry looking lone turkey seemed to really piss him off. A week later, I stopped by with a gift for him: a coffee cup with a big turkey on the side and the saying "Don't Let The Turkeys Get You Down" written across the top of the turkey. It became our favor sayng to each other and always made us both smile. "Dont let the turkeys get you down!"

One of my favorite bloggers, who always tries to 'stay on the sunny side' thought about plugging out of bloggyland recently. I'm so glad she decided to stay. I left her a message '...don't let the turkeys get you down.' Now, maybe when she reads this, she'll know why I chose those words. And, when remembering those words, I hope it makes her (and you too) smile while looking in the freezer and seeing more than just one lonely looking turkey staring back.
Posted by At Rivercrest Cottage at Monday, October 03, 2011 2 comments: