A fellow blogger lost her husband on Sunday.
He suffered a heart attack, and he was gone...
Just like that!

We have become blogging friends over the
course of several years. I sent her my favorite
book when she was dealing with a challenge. She
made me this sign below for my blog when she
was back up again. 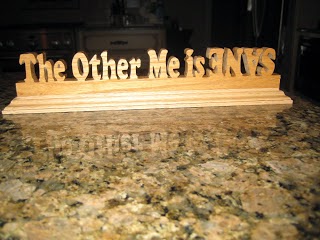 She writes about life and always ends her post with
"Stay on the sunnyside of life."
Her husband was her everything.
My heart breaks for her.

Sears is due to deliver a new mattress and box
springs today. At 7:30 a.m. they called to say they
only had the mattress on the truck, no boxsprings.
"Deliver the mattress anyway" I said, without
my usual moaning and groaning...

We have lots of company coming, they need a
place to sleep. As long as we're all here and healthy,
a mattress on the floor suits me just fine.

Wild Bill went to the podiatrist this morning.
His foot has bothered him for a couple of weeks.
The doctor said a couple of small bones are broken.
He needs to wear a stiff boot and stay off his feet
as much as possible. Even with company coming,
as long as we are all here and healthy,
that suits me just fine.

A friend lost her husband Sunday.

It makes you realize that as long as we are here
and healthy, nothing else really matters does it?

Email ThisBlogThis!Share to TwitterShare to FacebookShare to Pinterest
Labels: At Rivercrest Cottage, Fixin' To-Do List, Not all those that wander are lost


Hey there! I'm back with another easy cake
idea based on the "one cake mix and one can of
pure pumpkin" mixture I've told you about before. 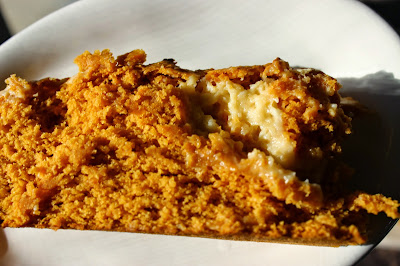 I had a hard time getting a good photo due
to lighting issues so you'll have to pretend
it looks good!

I made this cake in a 8 x 8 pan, but found
using a loaf pan really works much better
with this type of cake, so I'll stick with a loaf
pan in the future. 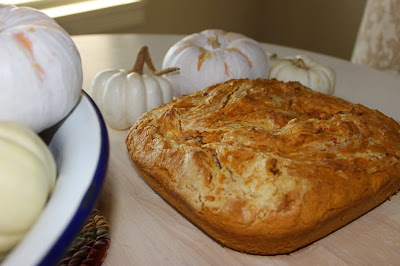 For this cake, use a white cake mix, stir a 15 oz can
of pure pumpkin into it. Remember...no eggs, water,
or any other of the normal ingredients.

Next, pour half the cake/pumpkin mixture into a
greased loaf pan (or an 8 x 8 pan as I did here.)

The final step is to gently cover the cream cheese
with the last half of the cake mixture. 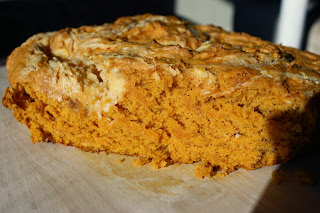 Bake at 350 degrees for approximately 35 to 40 mins.
To ensure it's done enough, stick a butter knife
into the center of the cake to see if the knife
comes out clean.

My husband really loved this version of the
pumpkin/dry cake mix recipes I've been writing
about. As I said before, I thought using a loaf pan
made a much better cake and I'll stick to making
these in loaf pans in the future.

Thanks for dropping by.

Posted by At Rivercrest Cottage at Wednesday, November 12, 2014 5 comments: 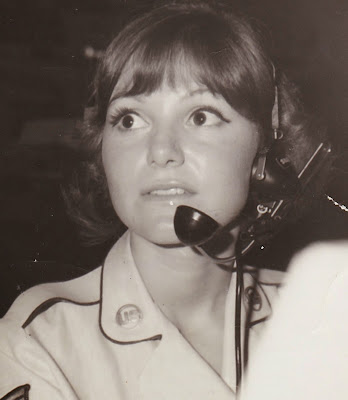 I joined because my family was extremely
patriotic and there was a war going on.
Both of my older brothers had already enlisted. 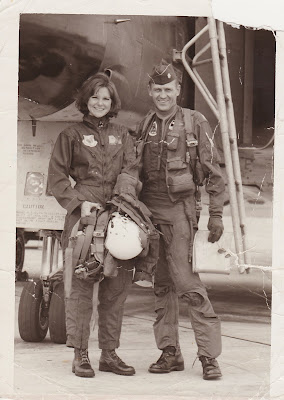 I had no clue what an Air Traffic Controller
did, but 8 months later I was one.

As the first female controller stationed overseas,
(18 months at Clark AFB in the Phillipines)
I was in an article in the overseas military
newspaper called The Stars And Stripes. 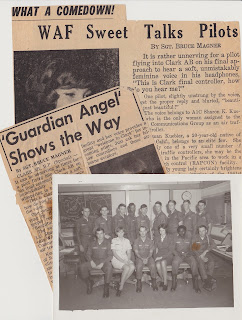 Today Air Traffic Control is full of women,
but being one of the first meant always being the
only woman at work or in meetings. 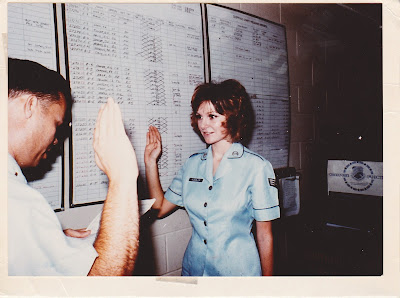 My father-in-law is one of the real hero's in our
family. He was at the frontline, in the trenches,
at the Battle of the Bulge during WWII. 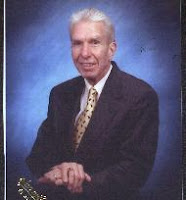 My own father lied about his age and joined
the Navy when he learned his older brother Sperry
(U.S. Navy) was captured and was being held in a
prisoner-of-war camp in Japan.

My dad died over 20 years ago, but here's a picture of
him as I remember him best, taken in the early 1960's.
He loved cigars and I think of him whenever I'm
lucky enough to catch a whiff of cigar smoke.
Yes, I love the smell of cigars... 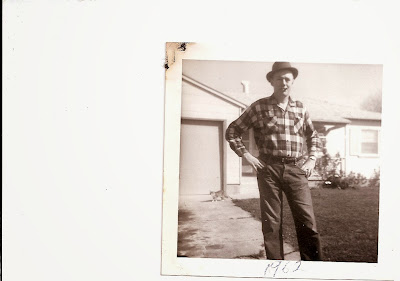 I recently discovered the Government's
website for archived records and was able
to read about my uncle's prisoner of war
camp, Fukuoka POW Camp #1
(Kashii-Pine Tree Camp), which was
on the Japanese island of Kyushu.

Many restaurants offer free meals for
veterans in honor of their service. In our
area the following are a few of those
restaurants:

Posted by At Rivercrest Cottage at Tuesday, November 11, 2014 11 comments:

Email ThisBlogThis!Share to TwitterShare to FacebookShare to Pinterest
Labels: family ties, Not all those that wander are lost

Did You Know: Starbucks


Yesterday we went to our local Starbucks.

I was craving what I call a Crap-a-chino,
(a double chocolate chip concoction) and
Wild Bill loves a good mocha. 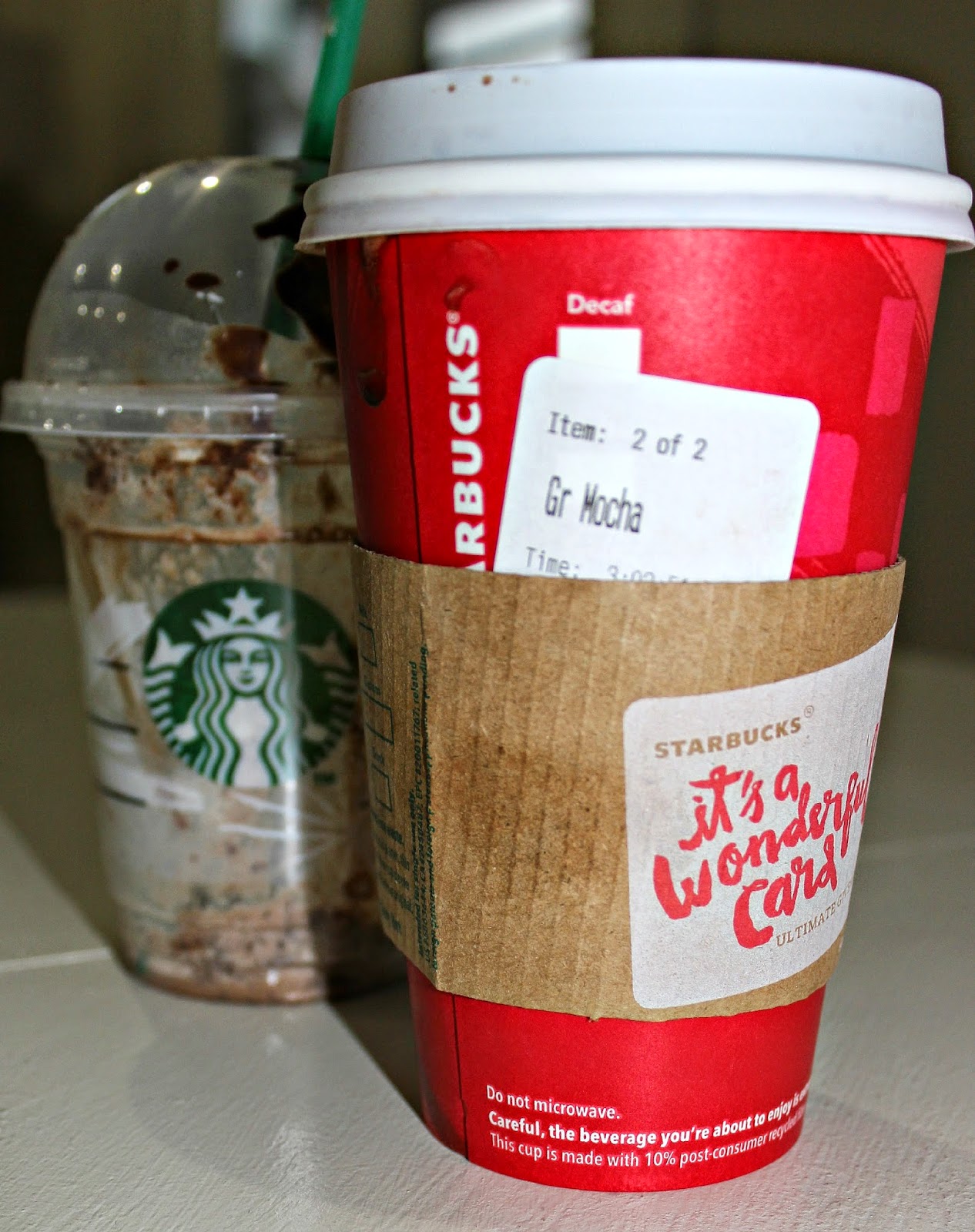 The line was long, but I was willing to wait.
After about 15 minutes, we were handed our drinks. 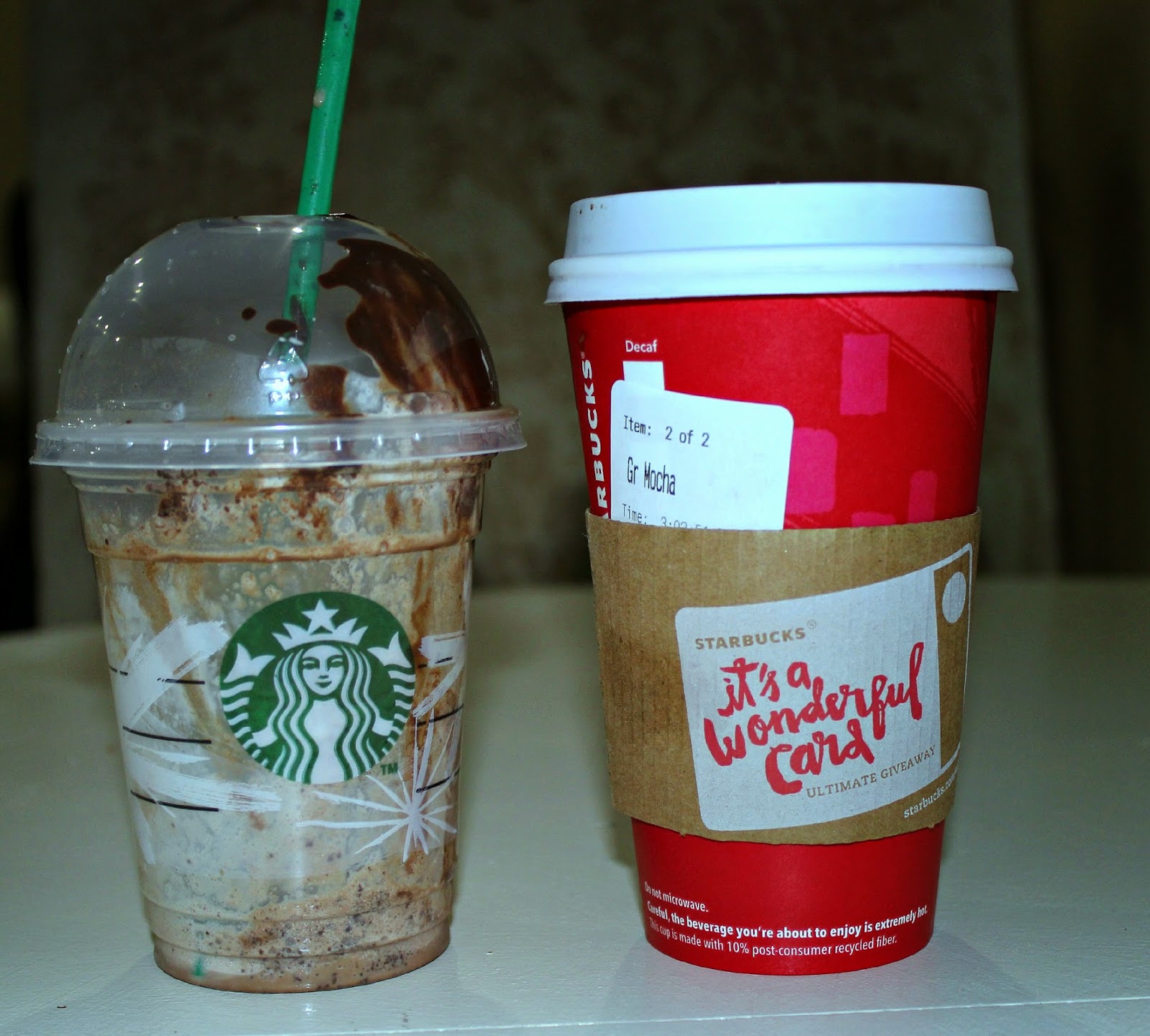 I had my money out waiting to pay, but the
drive-thru window person said:

"This is on us because you waited too long"

Never has this happened to us no matter how
long the wait... I didn't know they did this.

So thank you Starbucks!

We're giving them a shout out for good
customer service.

Posted by At Rivercrest Cottage at Wednesday, November 05, 2014 6 comments:

Places To Thrive When You're Elderly

A lot of movies paint a deary picture of assisted
living for the elderly. I thought I'd share some
pictures and information to show the real concept. 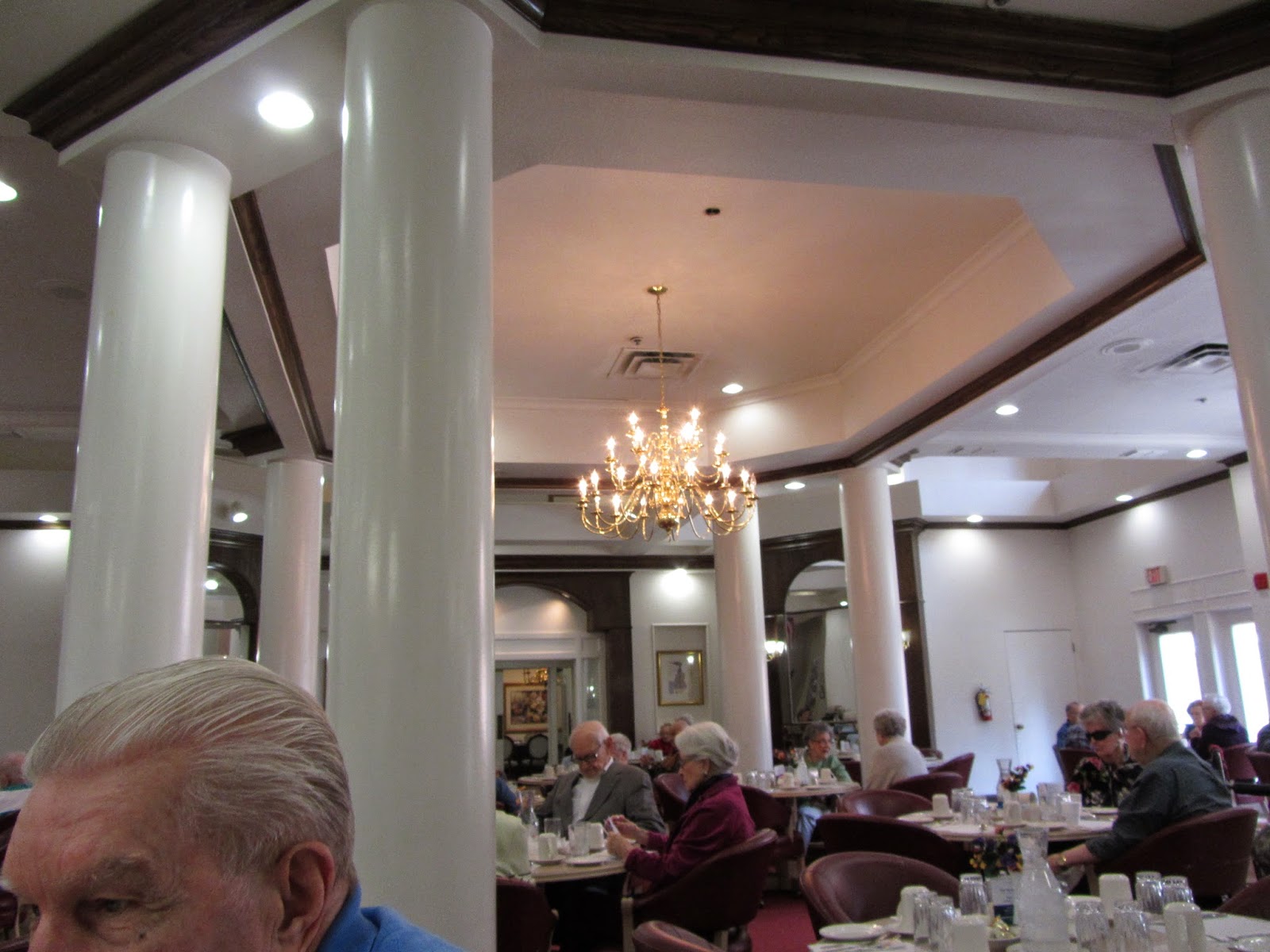 The retirement community is made up of
apartments all inside a large building.

Each apartment has a full kitchen, washer and
dryer, walk-in closets, and its own patio or
balcony outside.

The residents pay an "all inclusive" monthly fee,
which includes three, 3-course meals per day,
served in this lovely dining room.

Residents can choose to sit with a larger group
or intimate tables for two or four people. 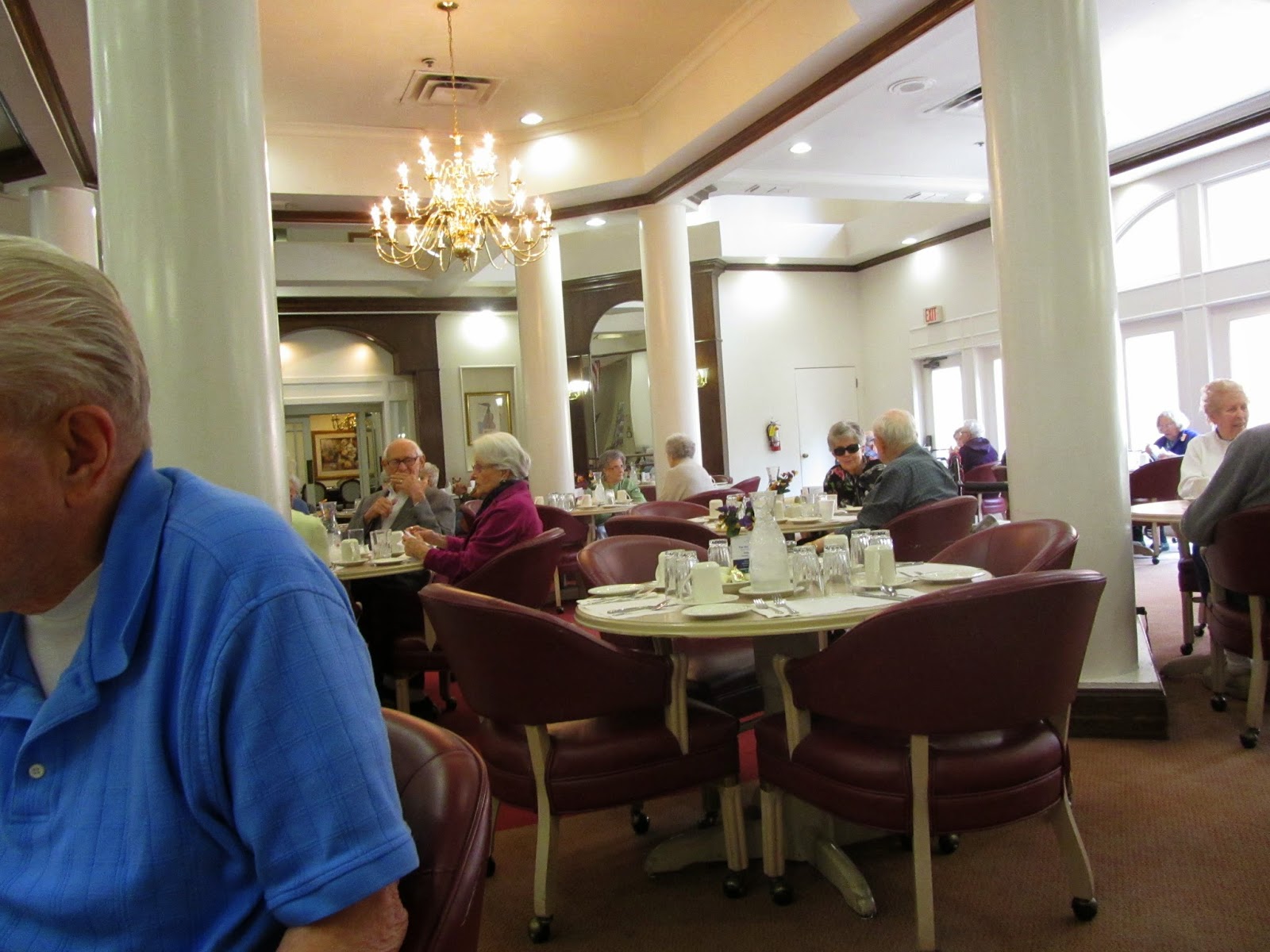 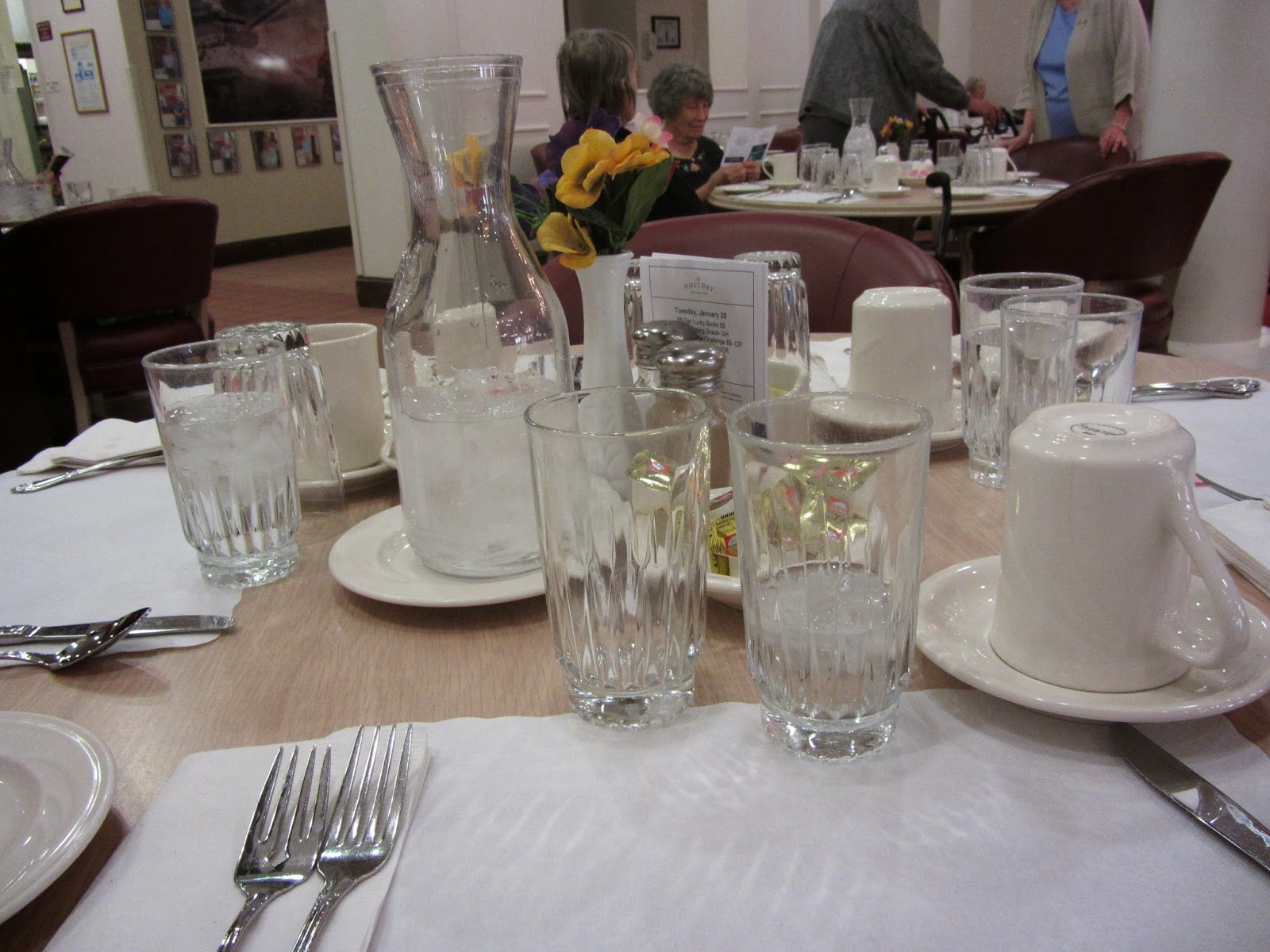 Here's our Pop with his favorite person, the
Activities Director. He describes her as sparkly! 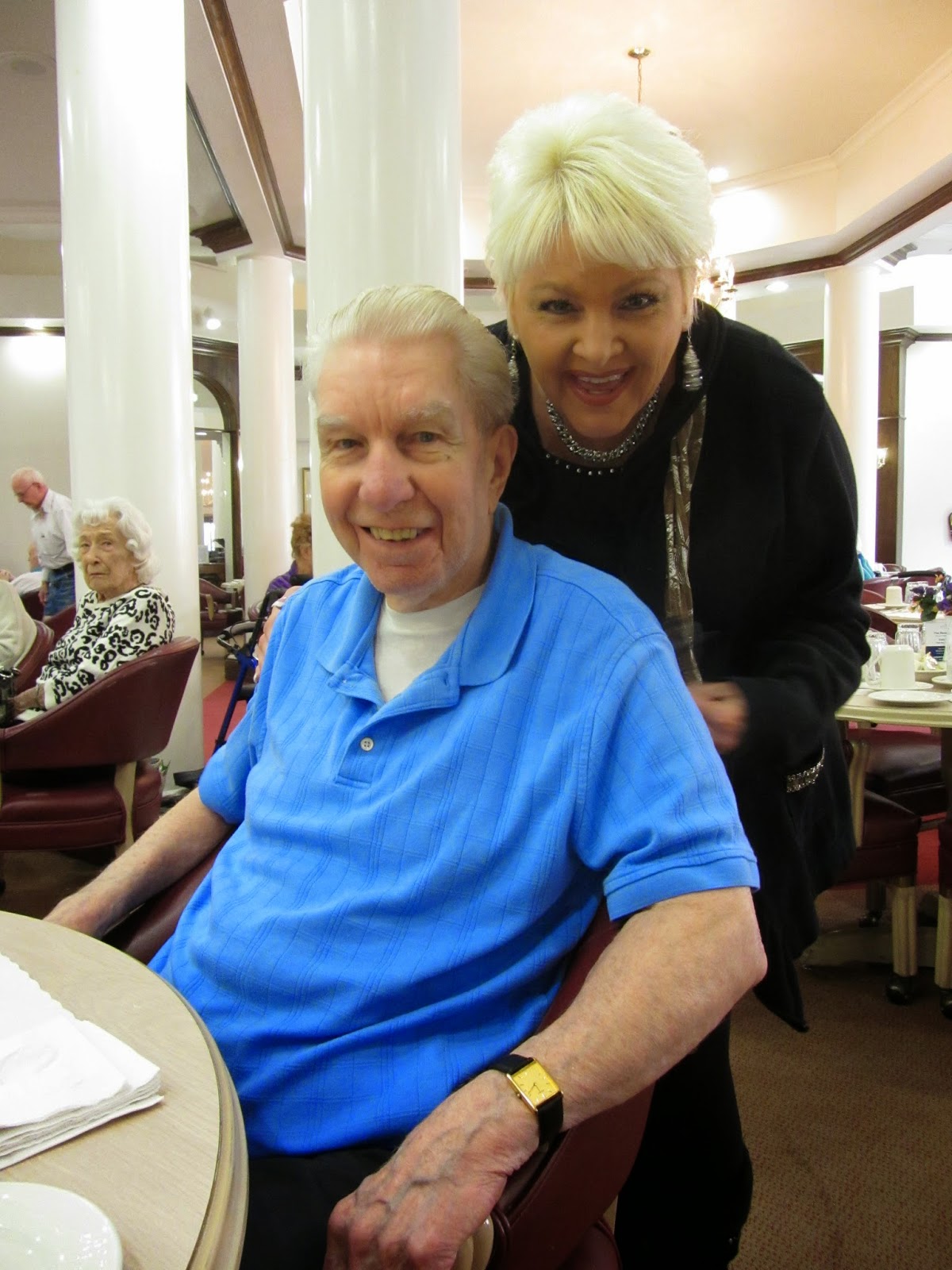 Each month, a special birthday celebration
is held for all the people who have a birthday
that month. Pop enjoyed celebrating his
91st birthday in October.


Meals are started with a first course served from
carts that carry several selections of fresh
vegetable and fruit salads, and many choices
of beverages. 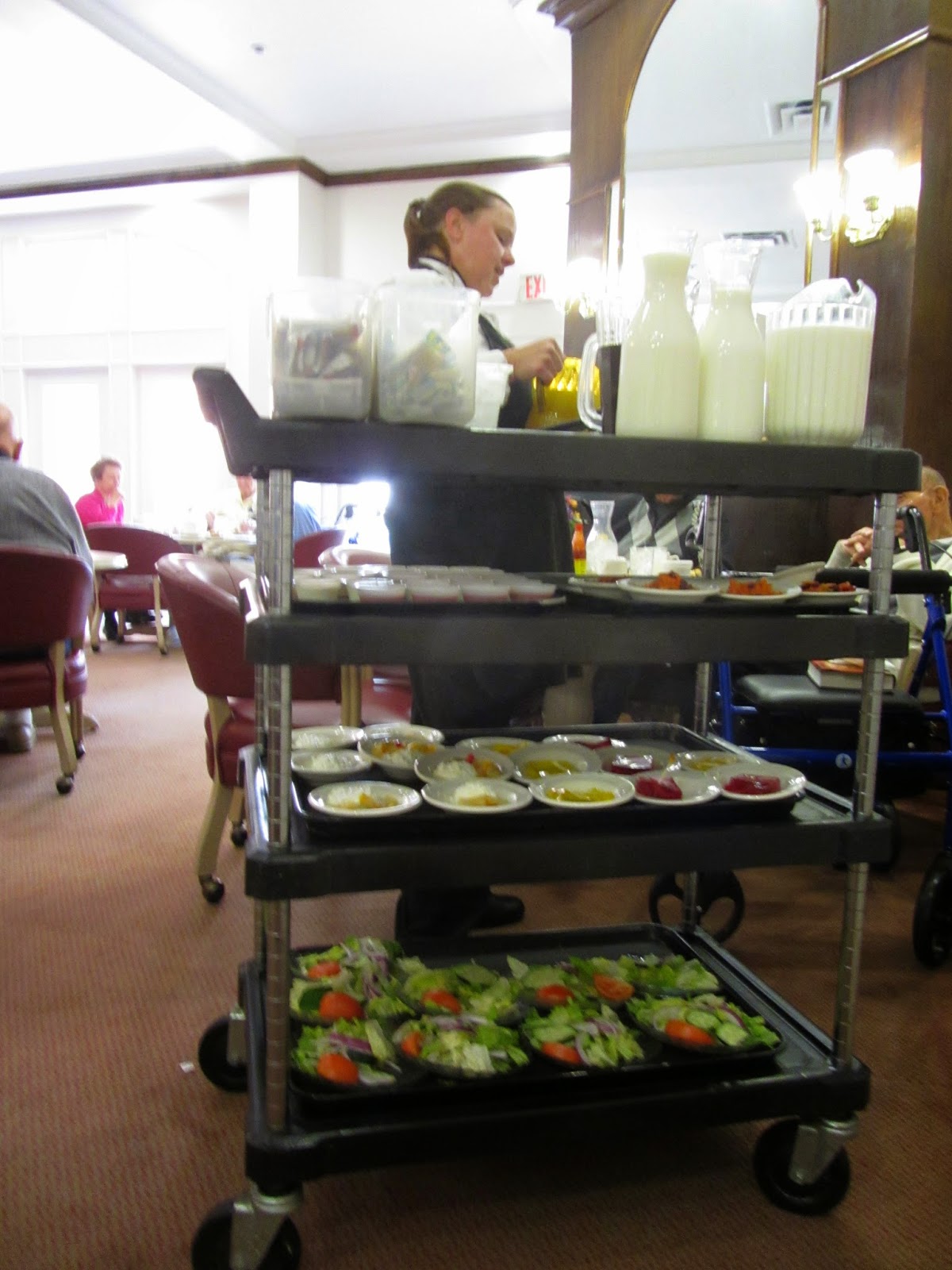 Here's the entrance hallway.
At Christmas it's lovely with twelve very tall
Christmas trees decorated in different
colors and themes. 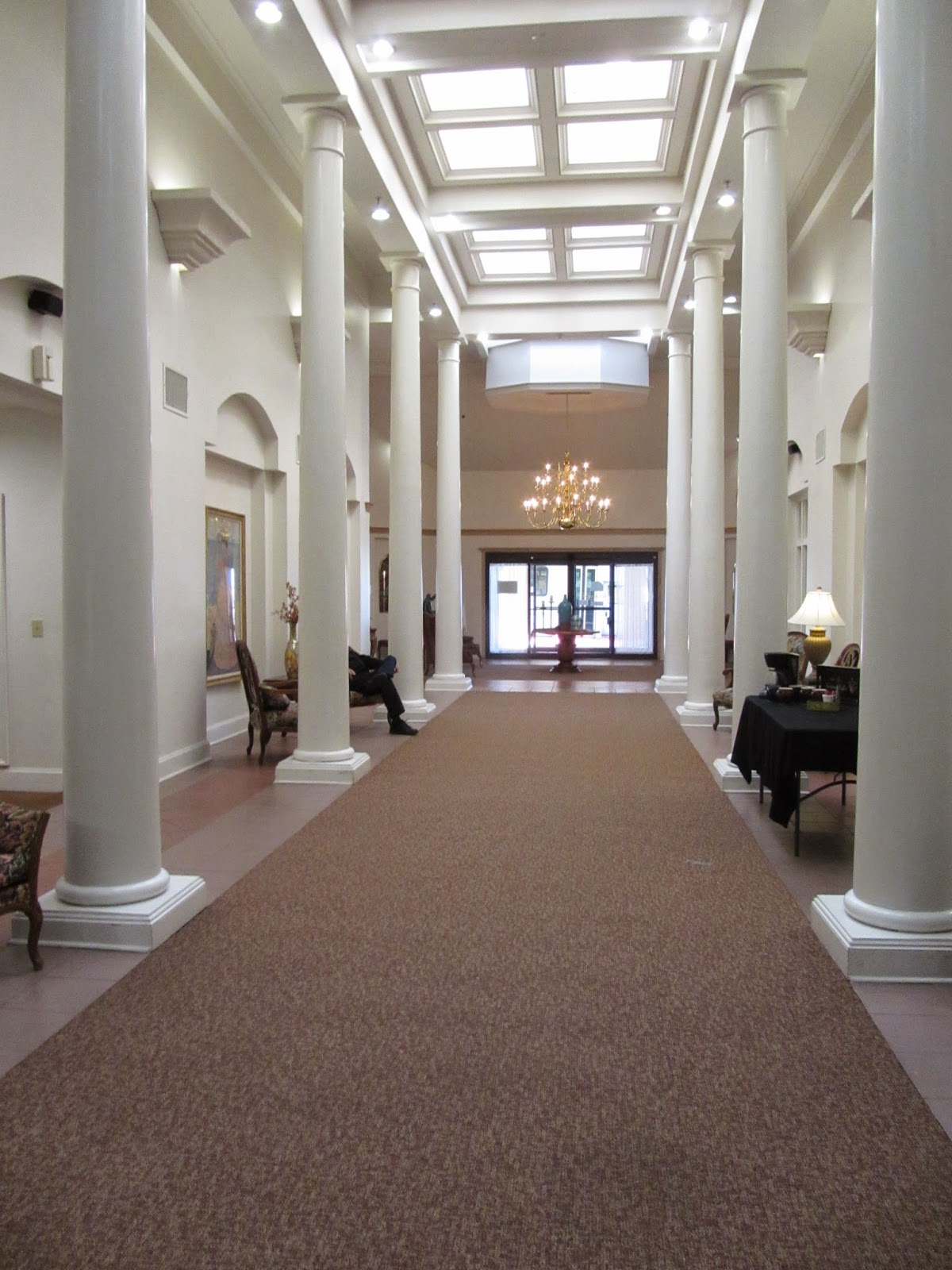 On Halloween, chairs are set up to line the
walkway and residents hand out trick or treat
candy to local trick or treaters. An ad placed
in the town newspaper invites all children
in the local community to an afternoon party.

Local talent is often hired to play this piano
and other musical instruments, but anyone
willing to sit down and play is sure to get an
appreciative audience. 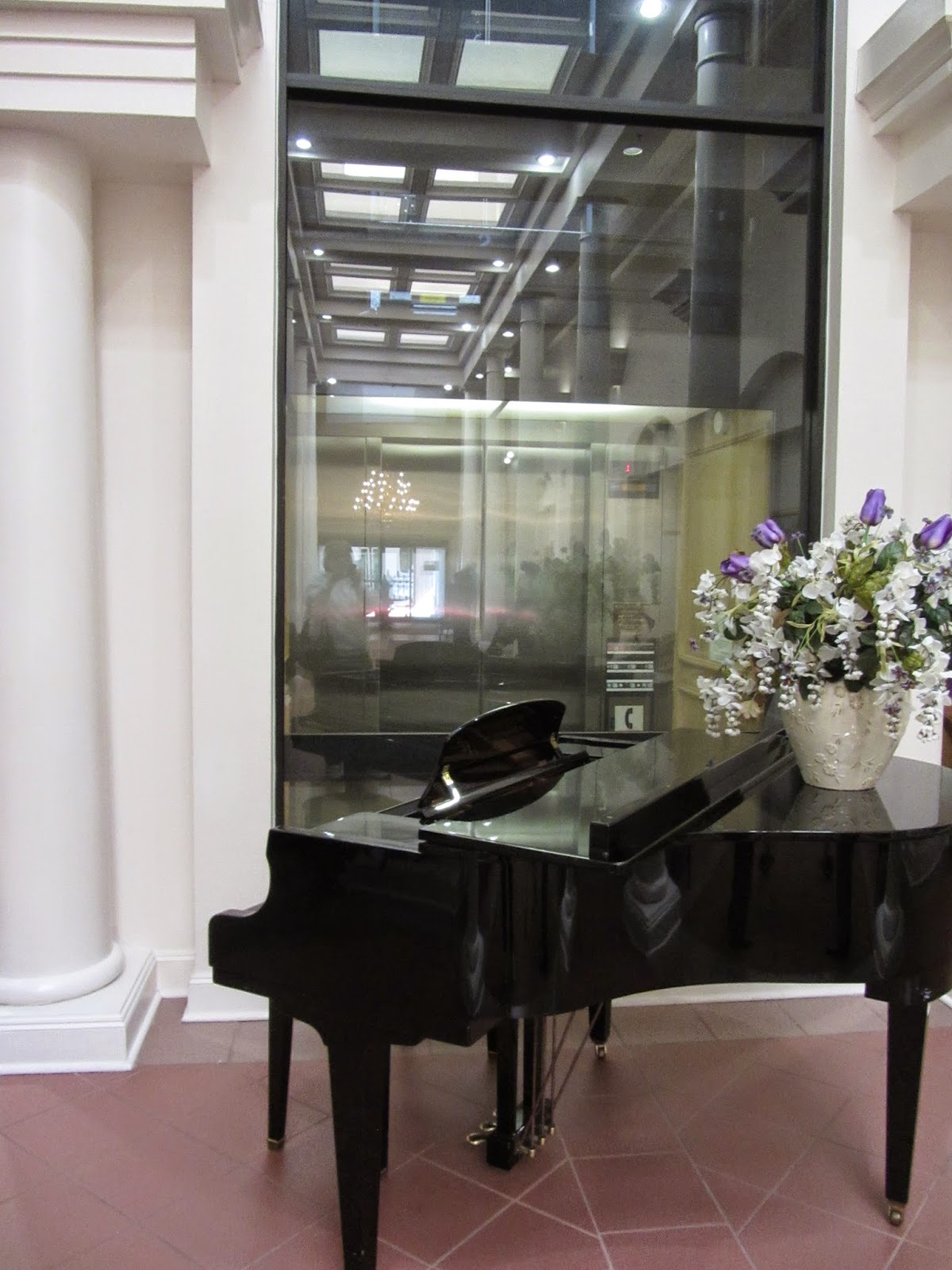 The mail room doubles as a community
bulletin board to ensure everyone gets a
notification of current activities and trips. 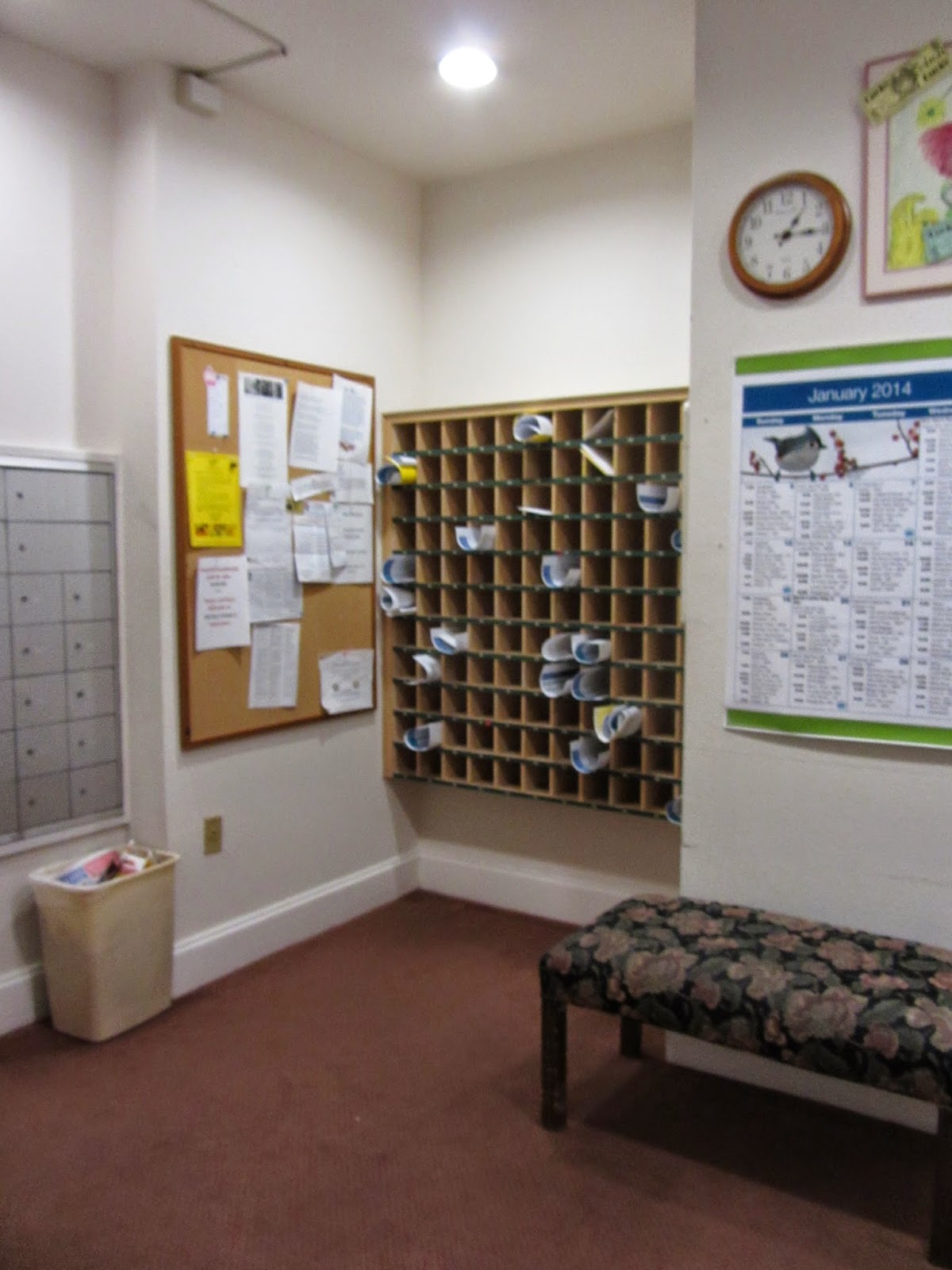 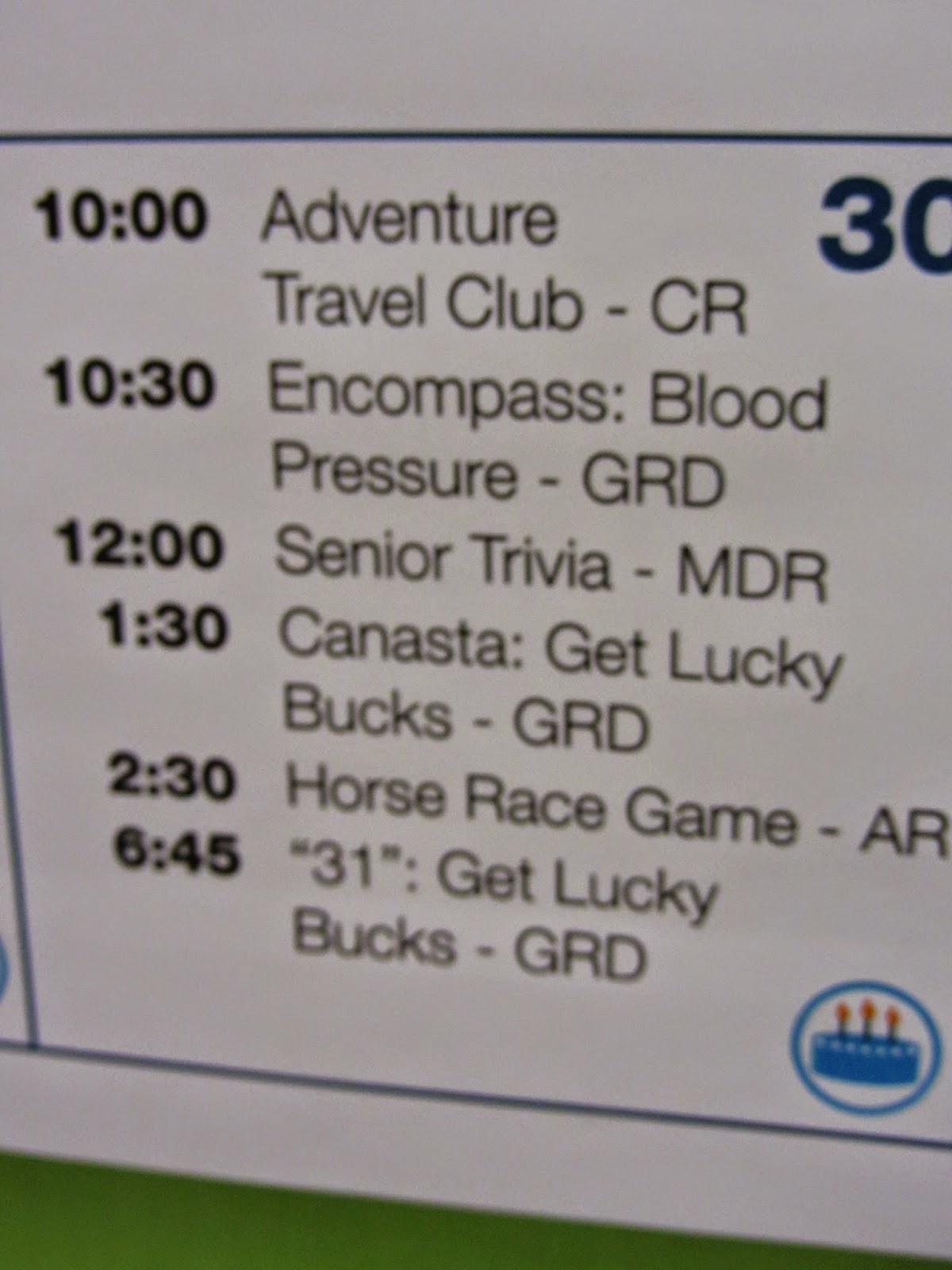 The in-house beauty shop is popular. 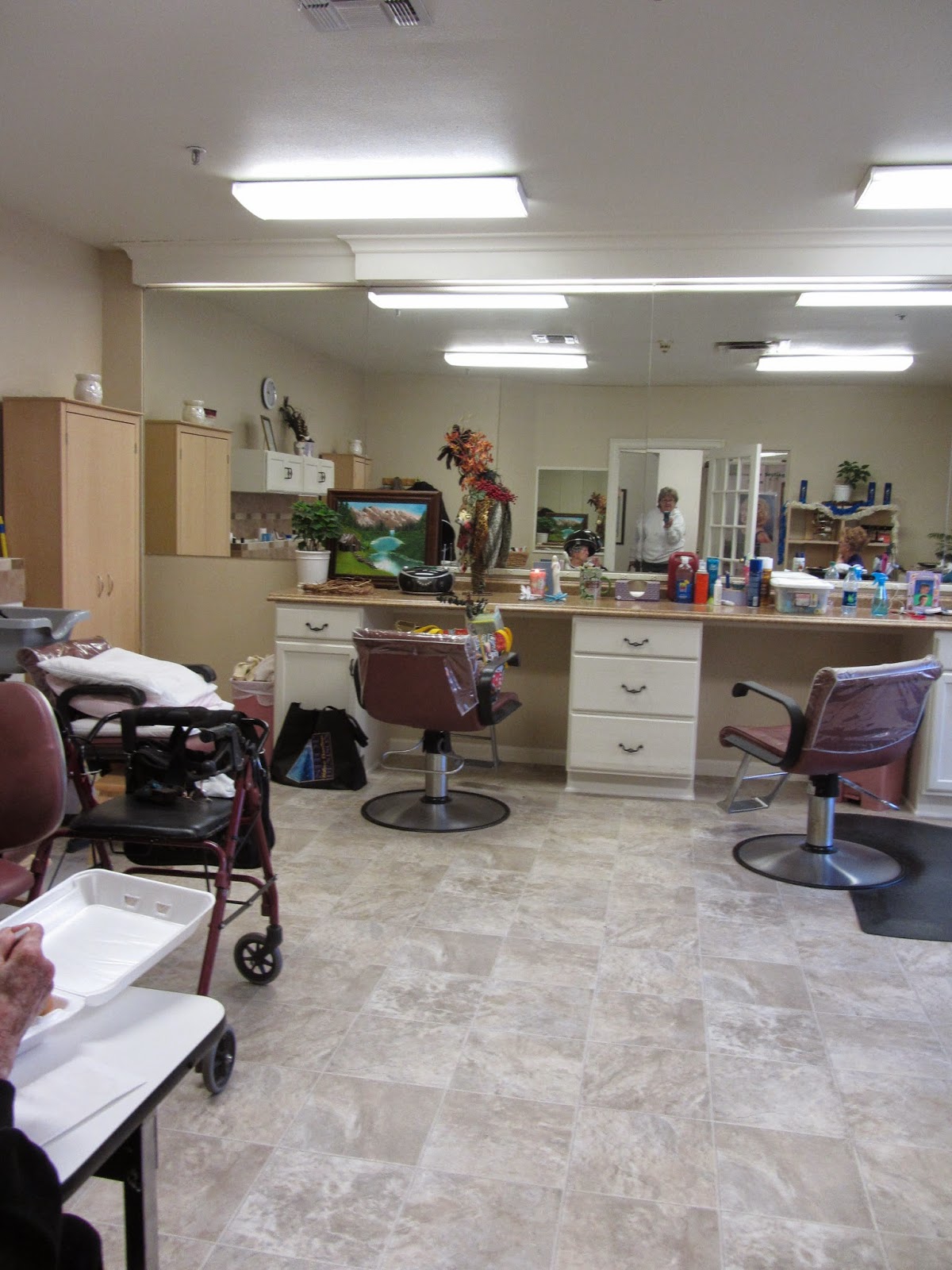 The exercise room gets a morning
work out and is quiet in the afternoon. 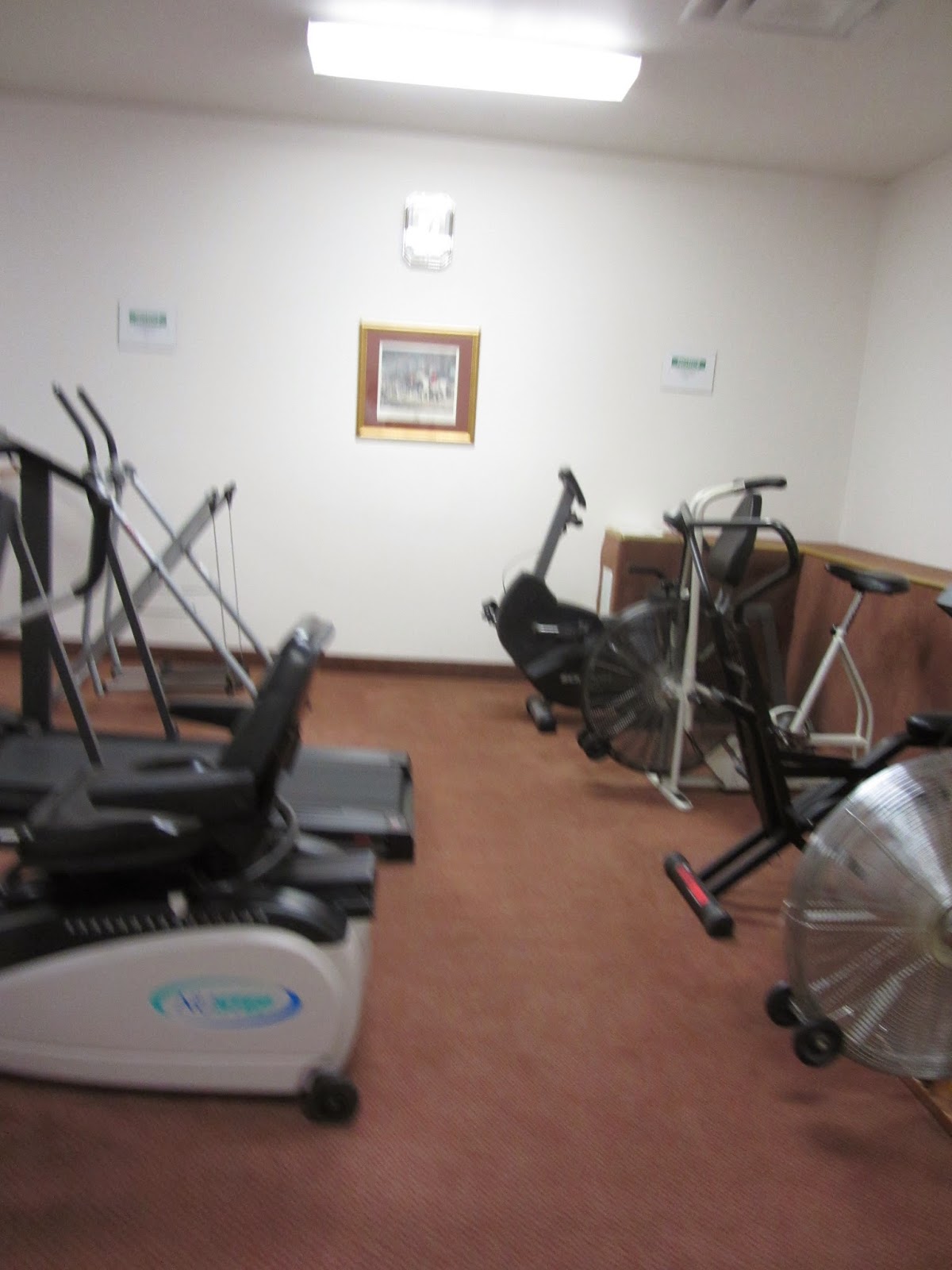 Pop jumped on to demonstrate and
give me an "action shot" for my post. 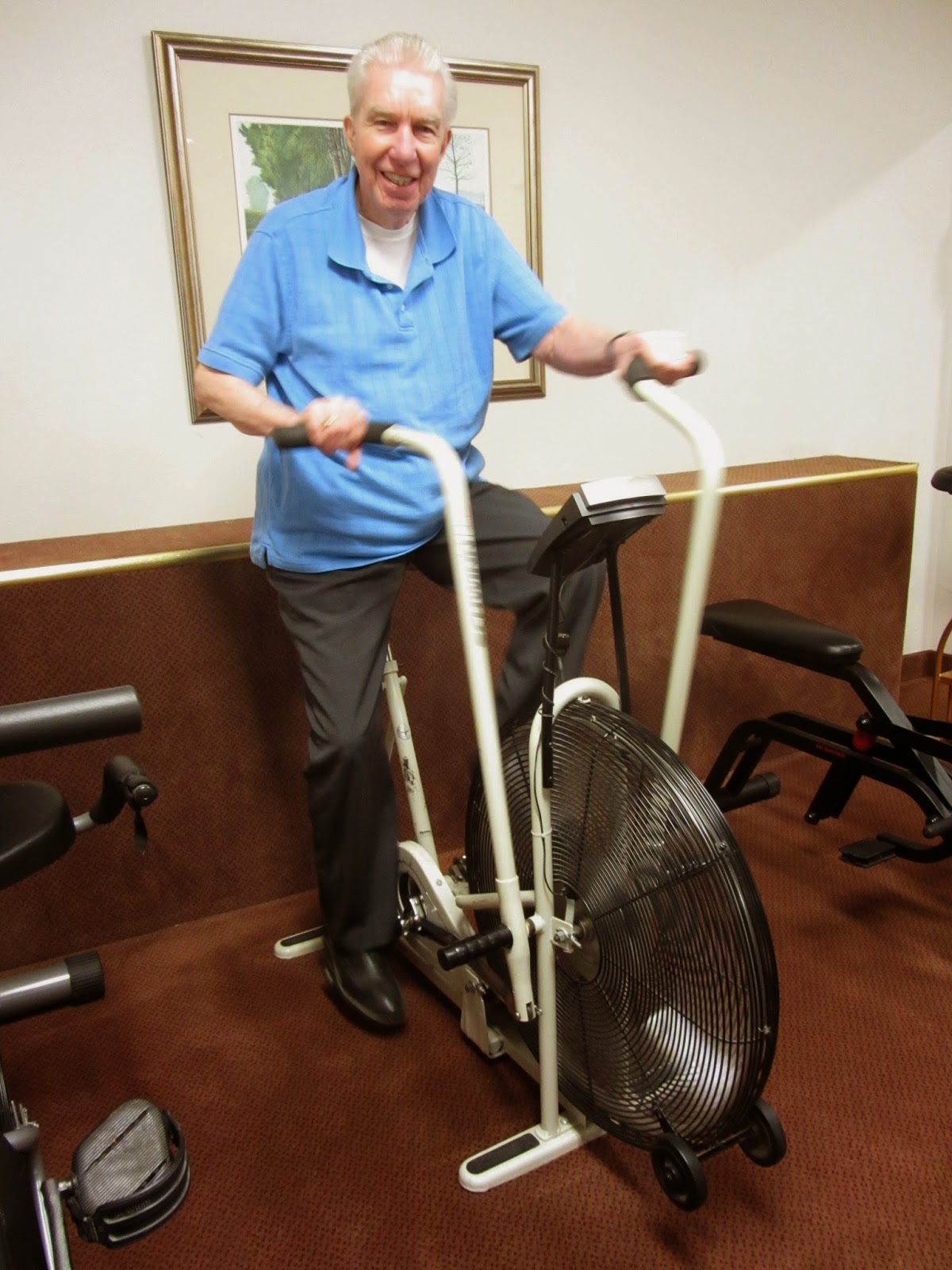 Apartments are cleaned by the staff once
a week and everything (such as paper towels,
toilet paper, light bulbs, laundered bed linens, bus
trips to shopping and appointments, security,
emergency call buttons, coffee and snacks)
is provided. 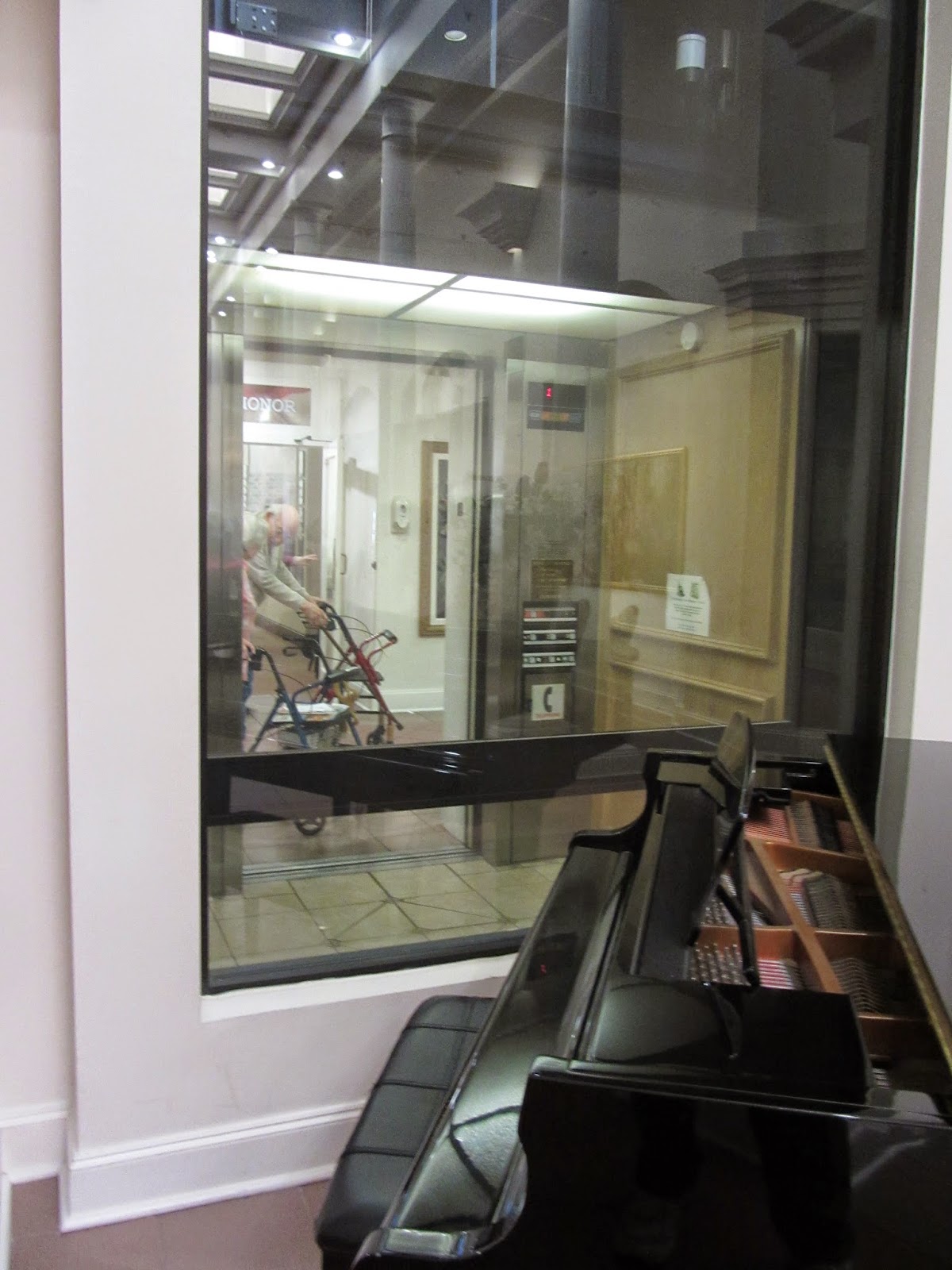 The glass elevator is one of many elevators
and stairways to the second floor.
The hallways are nice and wide to
accommodate scooters and such.

Here's my mother-in-law riding her "vehicle." 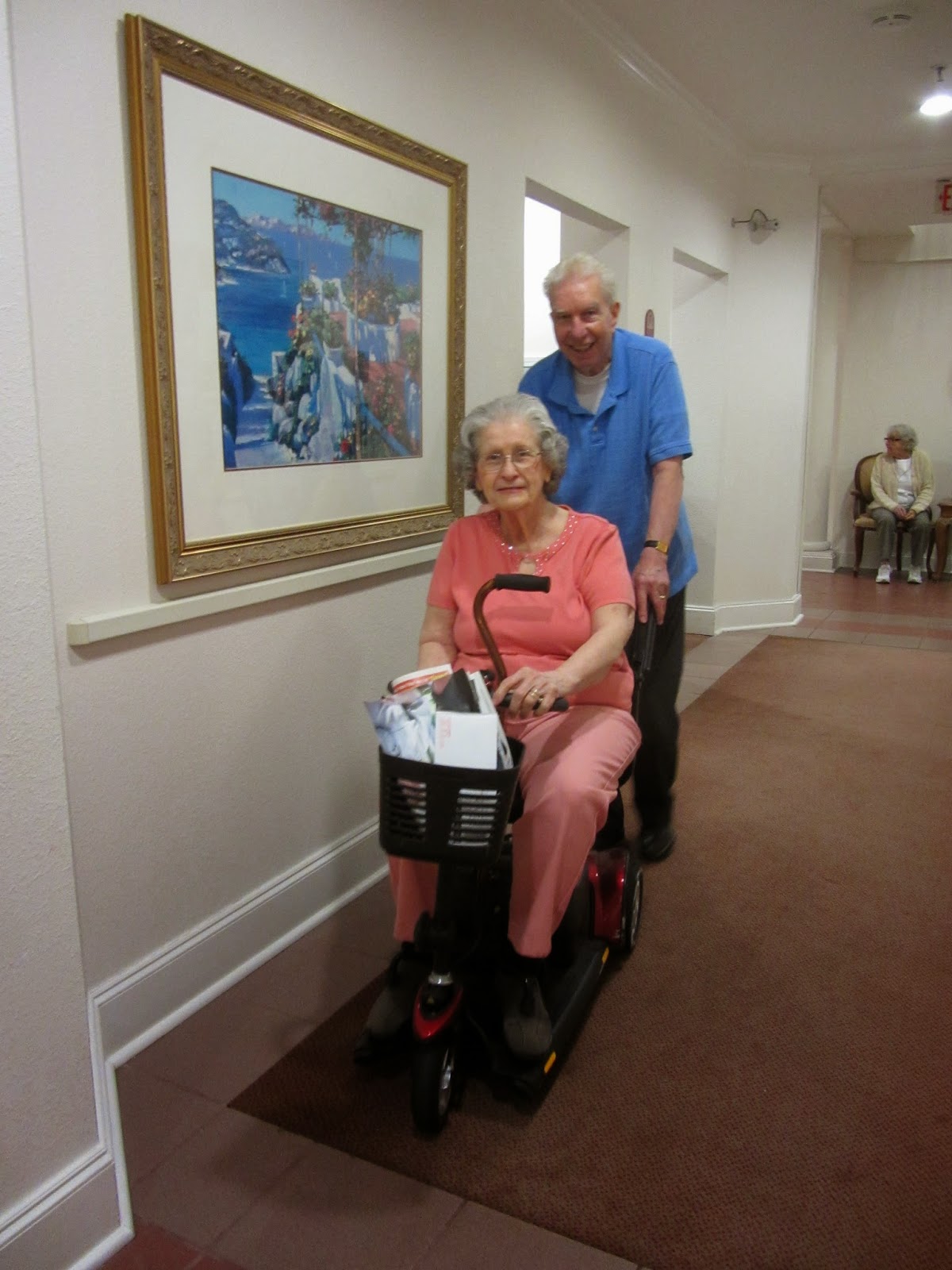 Residents tend to personalize outside
their door for the seasons. Last Valentine's
Day our little grand-girl Lily, was featured in
her great-grandma's display. 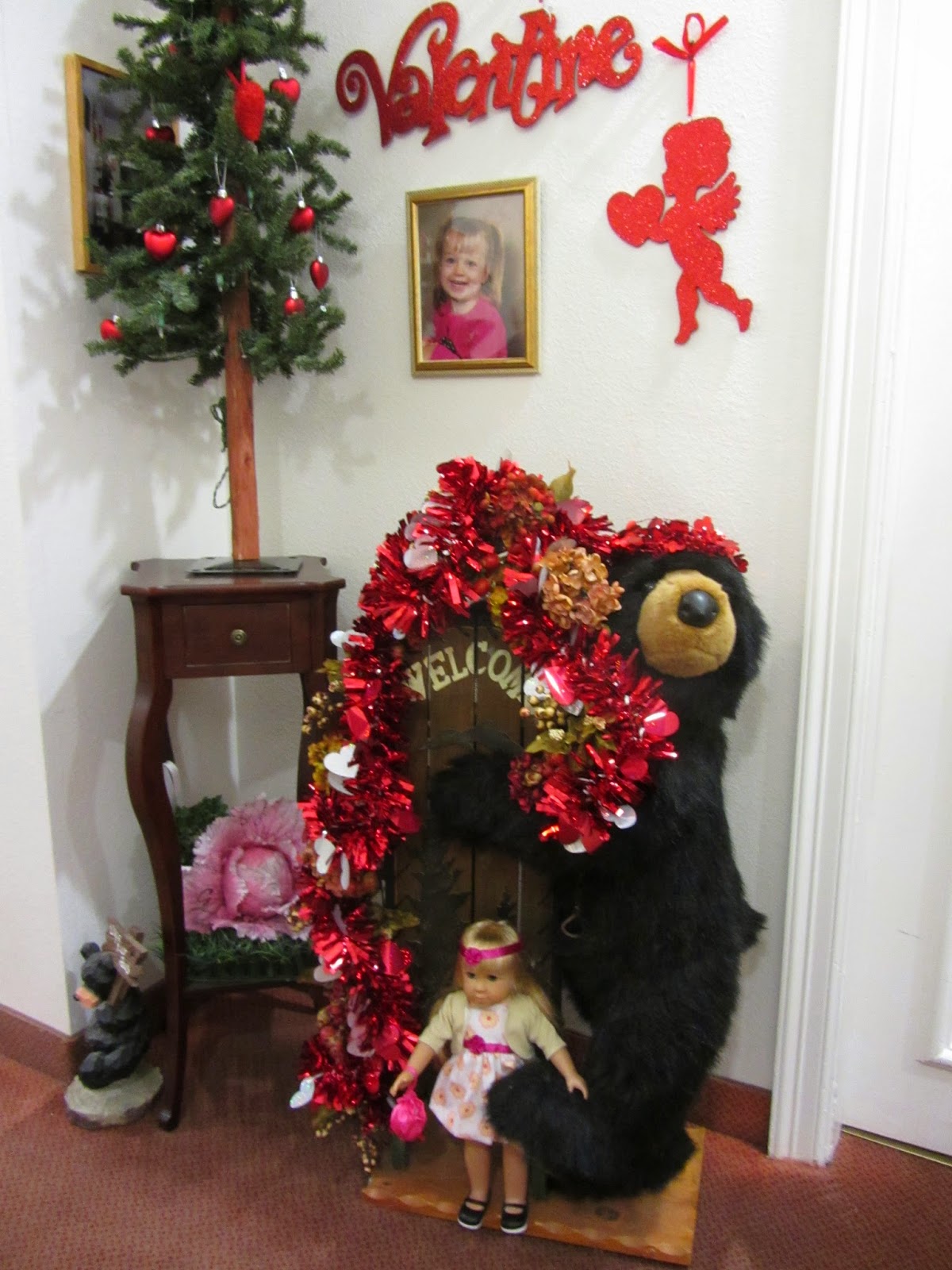 Here's one of the outdoor court yards
just off the back patio. Residents with dogs
love to walk them under the tree-lined walks. 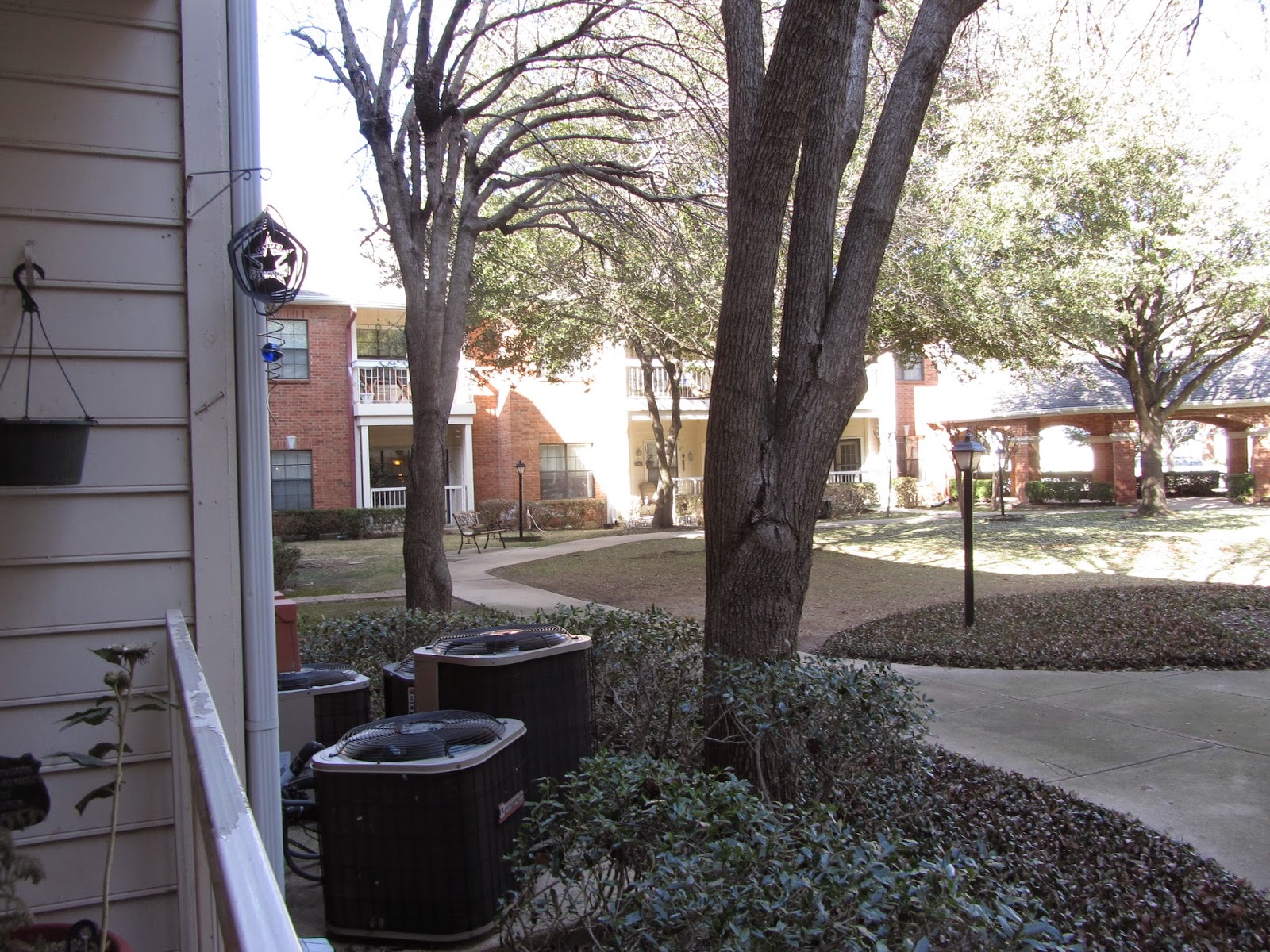 This is the only picture I have of their apartment
inside.  That's Pop's recliner which often gets
as much of a workout as the exercise room does. 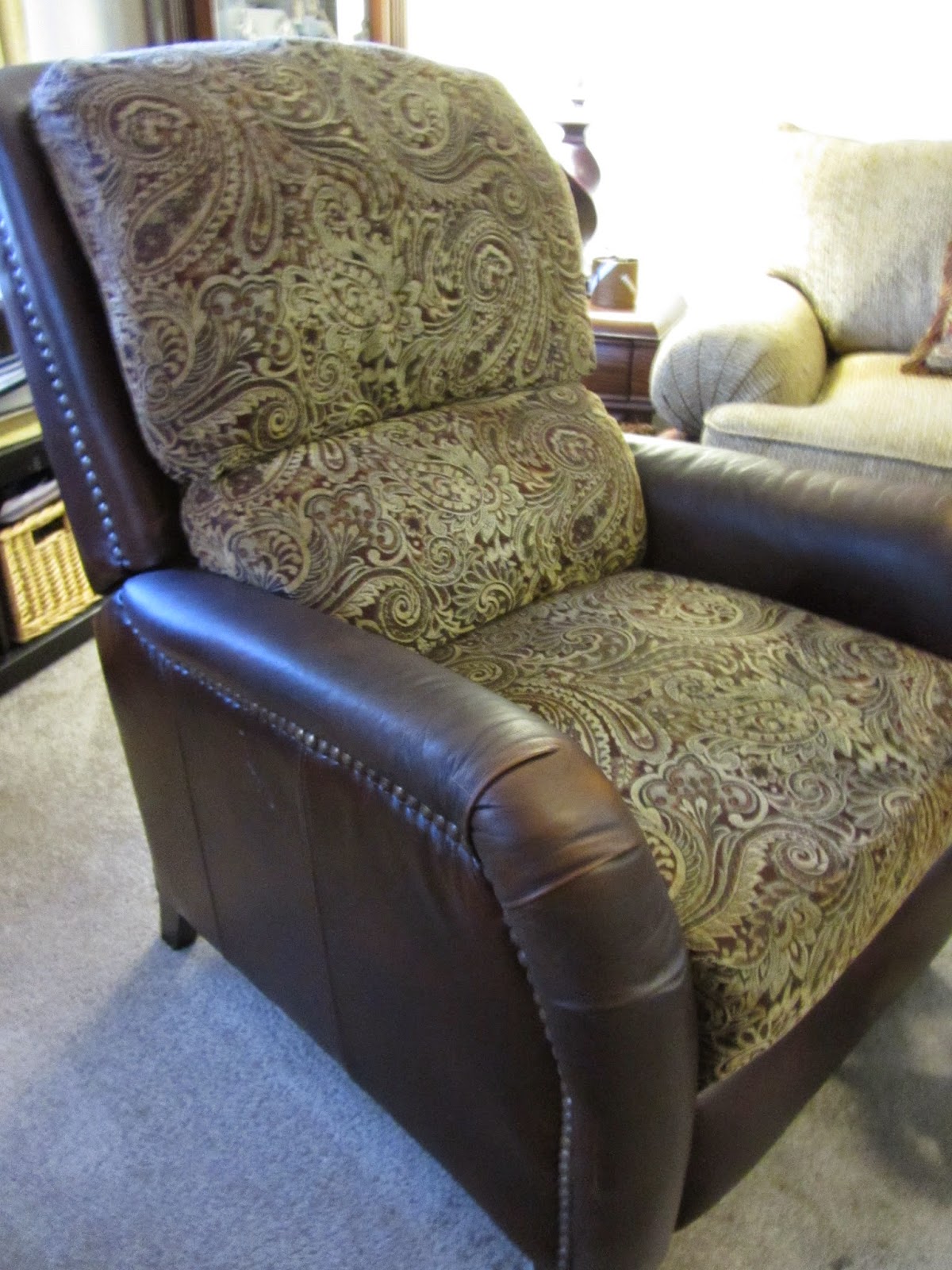 Hope you enjoyed the tour.

Thanks for dropping by.