Life has been busy lately, more about that in a later post.

For now I'd like to show you another project I completed a while back. I painted an old frame white and will age it down later. Then I bought a piece of MDF (medium density fiberbroad for the new crafters amoung us), which is basically the new plywood, and expectantly waited for Gampy to cut it for me...and waited, and waited.

So, after taking the measurements of the inside of the frame myself, I took me down to Home Depot (H/D) and bought another MDF board, which the nice guy cut to size for me... for free...right on the spot...NO WAITING...wow, I love it when the handyman is sooooo handy! 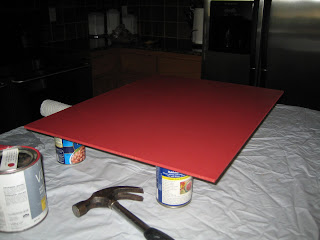 Here's my handy-dandy work station, AKA kitchen island protected with cheap 99 cent shower curtains from Walmart (WallyWorld) and cans of beans from the cupboard to use as lifters. Man, McGiver has nothing on me! 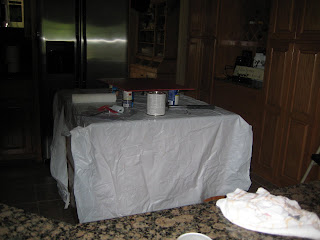 I first painted on a couple coats of red-colored primer. I use two primers, either white or red (for the darker colored projects) and a cheap throw away foam brush and a throw away foam 2 inch roller. After the primer dried, I painted on 3 or 4 coats of blackboard paint from a small can of it bought at H/D. 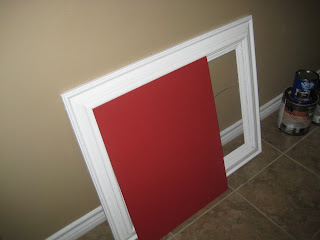 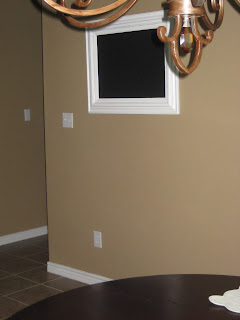 I'm impressed with myself here that I got project no 1 (the chandelier) in the shot with project no 2. I love when my picture-taking talent morphs past primitive! 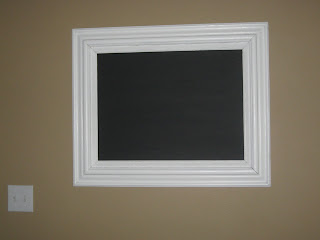 So if ya'll want a cheap decoration for your wall, try making a blackboard. You can paint the blackboard paint on almost anything. The other bloggers in blogworld would've written a snappy cute saying on the blackboard, but my handwriting has always been so shitty it would've cheapen the look, not improved it. Imagine the blackboard with writing on it...like for instance:

Dinner Menu: Beans from the cans on the counter

Well, that's not too snappy, but I'm sure you get the picture.

Posted by At Rivercrest Cottage at Saturday, July 31, 2010