A good many years back, I happened upon a photo of these curtains. I wasn't crazy about them, but there was something about these curtains that was so familiar!

I  rummage around in my mind a bit, and then I rummaged through an old box of photos.

OK...I have to admit this. I once had some brown and white bell bottom pants in 1971 very similar to those curtains! 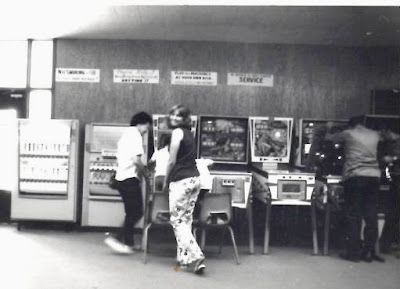 Do you remember bell bottoms and pinball?

So sorry for the bad photo here!  It's an old black and white instant photo from 1971. I had just returned from Clark AF Base in the Philippines after a year and a half overseas. I couldn't wait to get back and buy some stylish clothes! WooHoo.

That's my mother on the left and my little brother and sister playing pinball. Do you remember pinball? When I was a little kid, I was a pinball wizard along with my cousins and next older brother.

My cousin Doug and I were fanatics. Later in life, Doug's older brother Dale (nickname: Einstein, one of the first computer professors) wanted to surprise Doug with a refurbished copy of Doug's favorite pinball machine.

Soon after he secretly ordered the pinball machine, Dale died unexpectedly right after surgery, due to a blood clot. A while after the funeral, Doug got a call out of the blue that someone named Einstein had ordered a refurbished pinball machine for him, and it was ready to be delivered. Love Never Dies!

Notice the cigarette machines to the left of the pinball machines? Anyone could buy cigarettes back then!

I remember going to the liquor store by myself when I was 8 or 10 and buying Tiparillo Cigars for my father for a "surprise" birthday or Christmas present instead of the usual socks. No one batted an eye back then.

Geesh, in re-reading this I don't know what was worse...that a child would be completely fine walking into a liquor store alone, or that they would sell a child a pack of "Ciggies" or cigars without a moments hesitation! Trust me, life was much simpler back then.

And, P.S. I've never smoked, but I still love the smell of cigars. Whenever I smell someone smoking a cigar outside, I try to get as close as I can to them without looking like a stalker.

How about you? Have you got any 70's or 80's pictures and stories you're brave enough to share?


Joining the party here:
Share Your Cup with Mrs. Olson


Posted by At Rivercrest Cottage at Sunday, January 14, 2018

Email ThisBlogThis!Share to TwitterShare to FacebookShare to Pinterest
Labels: At Rivercrest Cottage, Everything Old Is New Again, family ties, The things we carry