I'm late for writing Five-On-Friday since it's Saturday, but I'm doing it anyway. Amy's blog party is open to join until Monday after all, so I don't think she'll mind. You can pop over and see what others are posting at Love Made My Home

One. Still Sorting Out: I'm taking 5 minutes to talk about sorting through our children's stuff and sometimes seeing what was there all along. During their growing up years, I had to limit the things I kept for my three daughters by putting the 'best' in a box for each of them, which they received when they were older. At that time, I found I couldn't part with the oldest daughter's handmade Kindergarten Christmas decorations and a paper from each of the younger girls, so I kept them for myself. I came across the two papers while cleaning out my desk. Looking back at their early writing styles, I'm amazed at what their writing tells about the adults the two youngest girls would become.

Two. Middle Daughter's first grade paper: When she was six, there didn't seem to be much hope for Middle Daughter when it came to spelling. I'm not showing this to embarrass her, but to give hope to all you other mothers of children who aren't natural spellers!

Middle Daughter graduated college with a degree in English with University Honors, studying more the technical writing side of English. She writes highly technical documents, first with a major telecommunications company and then for the last three years with a large computer systems company. I am totally confused when she tries to explain the work to me.

You can see below that even at six, she wrote in a no nonsense - just the facts - technical style.  See if you can read her first grade paper...Please note she did try to use punctuation though it's hard to tell if those are periods or commas. 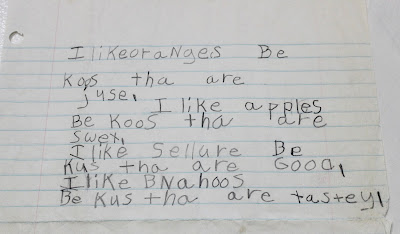 Three. Younger Daughter's Note To The Tooth Fairy: Younger Daughter graduated high school at 16 and went to Argentina (at that young age) as a foreign exchange student. I cried the whole time she was gone. She graduated college with a degree in English with writing honors for her poetry. Obviously, she tended toward the creative writing side of English while pursuing her degree.

As I understand it, her work now involves tracking projects, but she's able to use her creative writing skills to write publicity releases, reports and speeches for the president of the large company where she works.

Around age six, when she didn't have her tooth to put under her pillow, she wrote the Tooth Fairy on card stock using both sides, with a pretty blue marker for flair and using no punctuation, but lots of creativity. 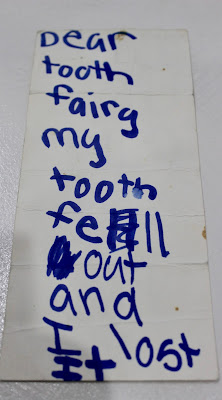 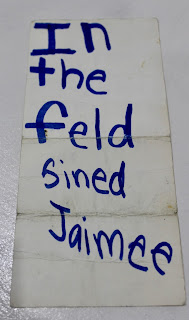 Four. Needless Worry:  I've always gotten quite a kick out of these two pieces of writing, and I truly cherish them. Somehow, until just recently, I never related their early writing style to the adult writers they've become. I do remember how much I despaired over Middle Daughter's lack of spelling skills when she was in first grade, and I see now it was all for naught!

Truthfully, when I look back at my life I realize most of the worrying I did was useless. What will be, will be!

This is the saying I now try to live by:

"Worry Is Interest Paid On A Debt Not Yet Due"


Five. A Link, Dr Spock, And We 'C' Students:  While looking for inspiration on the web this week, I happened upon this post about how not all students should be A students. That post got me into all this thinking about life...and grades...and worry.

It also made me think of the great baby specialist, Dr Benjamin Spock, who wrote the best-selling baby book of all time.
When a smart aleck news reporter tried to embarrass him about his less-than-stellar college grades, Dr Spock stated he got The Gentleman's C.  He said a grade of C showed a student cared enough to study, but still had time to learn about life. Dr Spock felt he wouldn't have been as successful in life if he had always been striving for the grade of A.

Who knows which way we should go? Too much studying or too little? What I know for sure is that I could've used that Dr Spock reference to defend my own sad high school grades.

Posted by At Rivercrest Cottage at Saturday, January 28, 2017

Email ThisBlogThis!Share to TwitterShare to FacebookShare to Pinterest
Labels: At Rivercrest Cottage, family ties, Fixin' To-Do List, Not all those that wander are lost