Can I Have This Dance?


Yesterday on the Veterans Day holiday, my WWII father-in-law Raymond left this world to join Jessie, his sweetheart of 71 years. 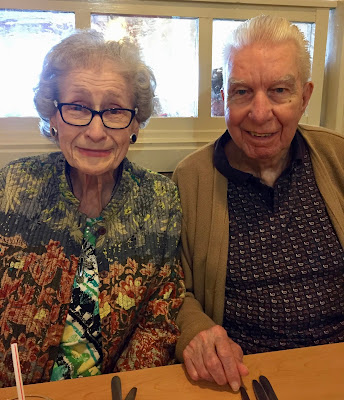 Jessie and Raymond, Now Together Forever

We do not grieve for him as we all knew when Jessie passed last June that Raymond would be impatient to once again be by his wife's side.

All his life Raymond loved to dance, and it was at a dance club in Dallas Texas back in 1947 that he asked a shy girl (sitting far back at a table with her friends) to come dance with him.

The music was lively, so Jessie said yes. Due to a paralyzed arm  (which was injured by the doctor at birth) Jessie seldom danced to slow songs because she could not lift her paralyzed arm to a slow dance position.

When the fast dance ended, Raymond did his best to keep the pretty stranger on the dance floor with him for a slow dance.

Jessie would have none of it, and she told Raymond she did not dance slow dances!

Now Raymond prided himself on his dancing prowess (and of course he thought he could change her mind) so he smugly asked, "Why not?"

Jessie's quick response was to point to her limp right arm and retort (in 1947 language), "I'm crippled!"

And an amused Raymond (who grew up with his beloved deaf older brother) shot right back, "Isn't everyone?"


Posted by At Rivercrest Cottage at Tuesday, November 13, 2018