Five On Friday: A Dog With An Attitude


Joining Saturday's Critters and Amy at Love Made My Home for Five-On-Friday. On Amy's post this week, she wrote about SUNNY things, showing a wonderful sunny yellow spread she had just made, and it perked up my saddened heart.

Last week our extended family lost another beloved dog-member. Two weeks ago, while visiting them, it was a bittersweet moment when I took these last pictures of youngest daughter and her almost 16-year-old Bailey. 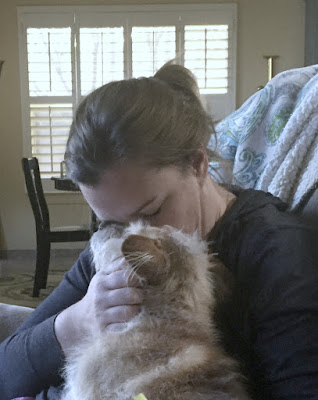 I knew it was the last time I would see Bailey with her mom, as Bailey's kidney and heart problems were fast bringing a close to this loving relationship. I'd like to share with you five things about Bailey Girl and our family, I'll try to keep them sunny. 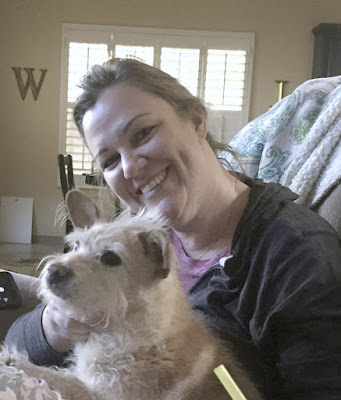 1.  Fourteen years ago, youngest daughter was a recent college grad and came to live with us in Albuquerque where we had just relocated. She often said she didn't plan to marry or have children...but a dog...now that was different!

2. We saw an ad for a "Pet In The Park" adoption clinic one Saturday soon after youngest daughter arrived. As we walked into the park that day, one dog lifted its head up high and stared at youngest daughter as if willing her to come pick her up! We went to the park just to have a look and came home with Bailey.

3. To know Bailey is to love Bailey, but she was quite a handful in her younger days. Bailey's adoption records show she had already been through several home situations in her first 2 years of life when youngest daughter scooped her up and hugged her in that park so many years ago. 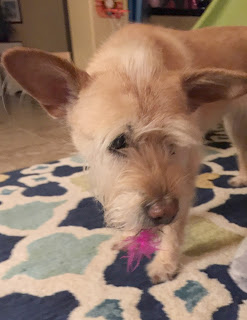 4. Here is a list of some of Bailey's devious misdeeds that come to mind at the moment. Some she was broken of, but not all.

5. As bad as she could be, Bailey was just as good-hearted. Slowly through the years youngest daughter's "single girl" attitude crumbled. Another dog was adopted...a husband, daughter and son added...two cats came along...and now a whole herd of fostered kittens shuttle in and out. Through it all Bailey accepted all the newcomers.

The first was a dog named Wrigley who had been so badly abused, he cowered at your slightest movement. Bailey sensed Wrigley's fear and helped him overcome it. When Wrigley would cower, Bailey would nudge him with her nose or give a low growl, as if to reassure Wrigs she was by his side. In the picture below she sits up high in her normal, vigilant pose. 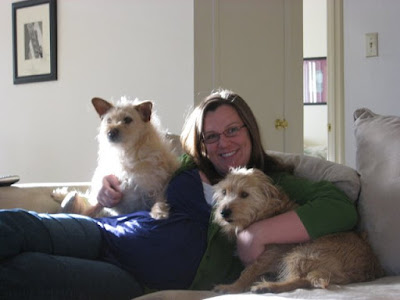 Bailey would normally take the lead and let Wrigley hang back a little, but not too much. Here they're getting use to their doggy packs for a Pet Adoption Day Parade. Bailey's leading in the black pack while Wrigs is hiding behind her in the blue. I think if Bailey had been a human, she would've rode a motorcycle and had a lot of pretty tattoos showing! 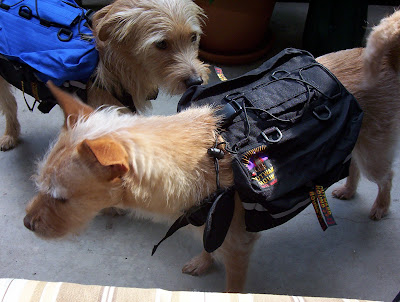 Bailey, ever watchful of her house, taught Wrigley (on the left below) to look out the window for anything out of the ordinary. No bird or cat entered "her" yard without a protest from Bailey. 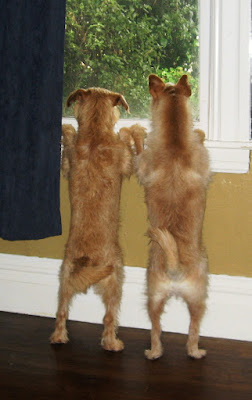 From the start, one of Bailey's favorite past times was joy riding in the car. As Wrigley got a little braver, Bailey was smart enough to let him sit in front of her so he got most of the wind in his face.

Just looking at pictures of the two of them makes me wonder how Wrigley will ever get along without her? For that matter, how will we? 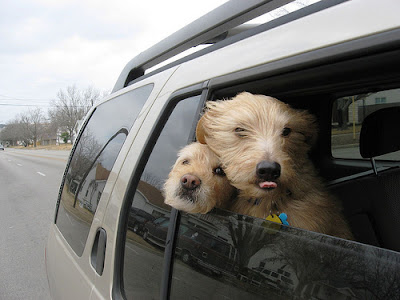 So long Bailey Girl...
Thanks for dropping in our lives 14 years ago!

Posted by At Rivercrest Cottage at Friday, October 28, 2016