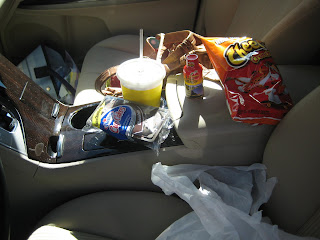 I left home early one morning headed toward Albuquerque NM, first stop on a trip out to the West Coast. I skipped breakfast and was on a road trip high, so I didn't want to stop for long. When I got gas, I managed to round up quite a collection of anti-boredom/anti-sleep foods to help pep me up. The chocolate and soda I hoped would give me enough caffeine and a sugar-high to keep me awake. I figured if that failed, I could crunch on some Cheetos. And, my last resort would be to down the little bottle of some sort of caffeine fix that the guy at the truck stop counter assured me would do the trick. When the sugar and chocolate had little effect on me, I tried drinking the bottle of caffeine -- just to find out the stuff tastes like crap. 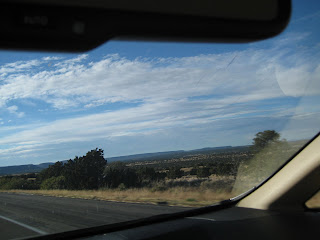 The scenery between Texas and Albuquerque is barren and scrubby. But the skies are the prettiest you'll ever see. Believe me, without those bug splattered bodies on that windshield, that sky is as blue as indigo. 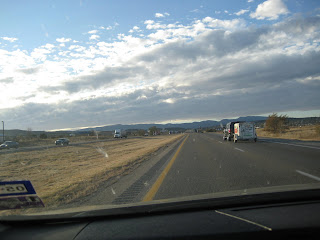 Next stop...Albuquerque!
Posted by At Rivercrest Cottage at Thursday, November 03, 2011