We took an impromptu road trip down south to the Waco Texas area recently.

Until we moved north in 2011, we lived in a small town near Waco. Every day I drove to Waco where I worked in the small downtown area, just a mile or so from where the Fixer Upper folks now have their market place and nearby restaurant. 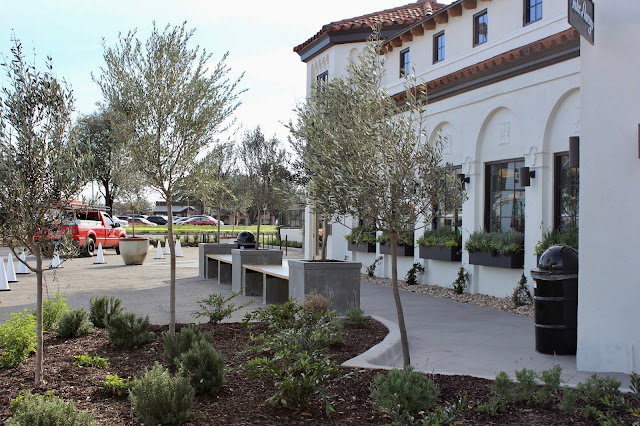 As old folks sometimes do, we started talking about taking a road trip one morning around 9, started packing a suitcase at 10, and we finally hit the road about 11. 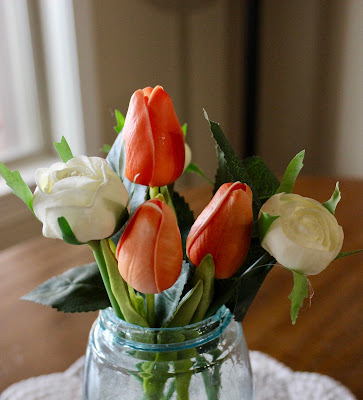 We did some shopping at Joanna's 'Magnolia Market at the Silos' first, then took a ride by Chip's new restaurant, Magnolia Table, even though we knew it was already closed for the day. 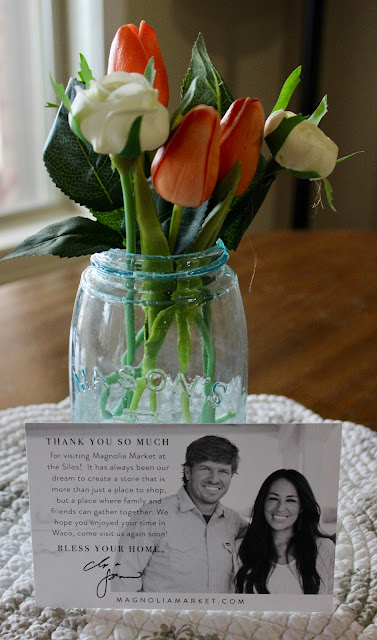 I only bought a few things at Magnolia Market (a Fixer Upper T-shirt and these sweet little flowers) because we are downsizing our "stuff" these days, but there was so many wonderful things to see and do. 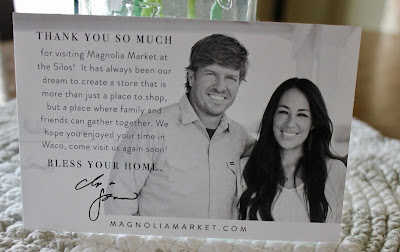 When we got home and I was unpacking, there was a cute little "Thank You" card in the bag. The card talks about how Chip and Joanna hope their market place area will become a gathering spot for families and friends to come and enjoy themselves. I can assure you it already is!

There's so much to see and do at the Magnolia Market shopping area, but that's a story for another post. 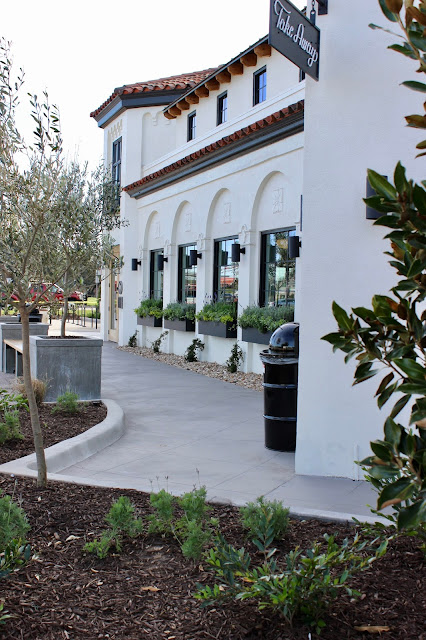 Just like the homes they do on Fixer Upper, Chip and Joanna's buildings and landscaping were the real star of the show! 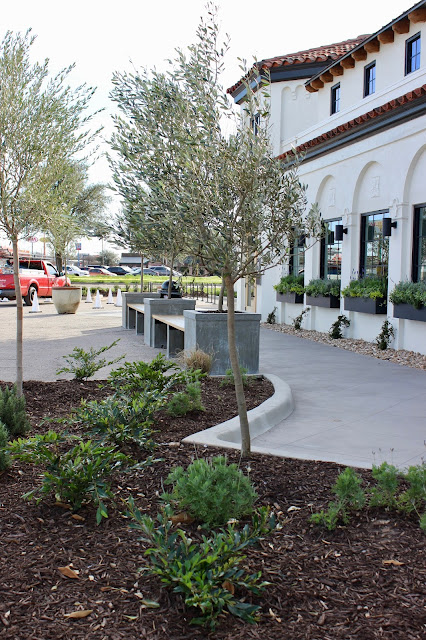 The new restaurant is open from 7 a.m. until 3 p.m. and is only a short driving distance away from Magnolia Market at the Silos.

The Magnolia Table restaurant has already opened for business, but the landscaping was still being "tweaked" when we were there. 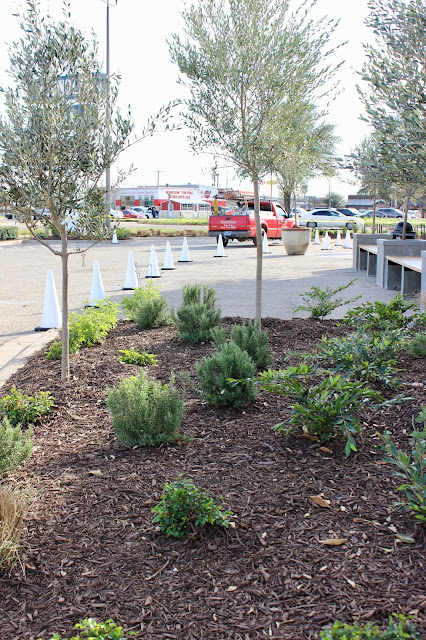 At our house this winter, we've lost some plants in our own bedding areas that we'll need to replace when the weather warms up. Seeing the simple (but beautiful) landscaping Chip and Joanna did on their grounds inspires me to make ours simple too. 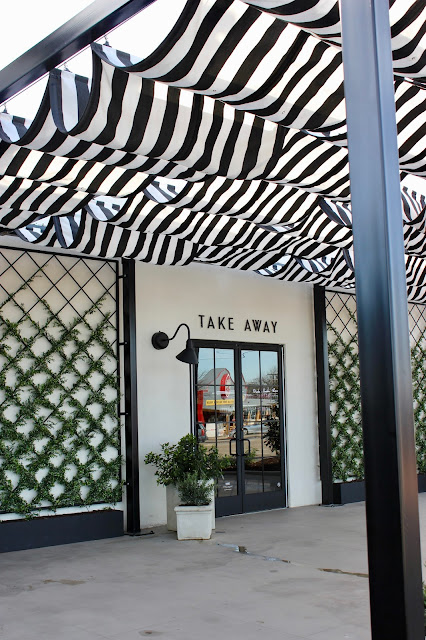 If you're a big fan of white and black with beautiful landscaping, you won't be disappointed at either the Magnolia Market shopping area or the Magnolia Table restaurant. 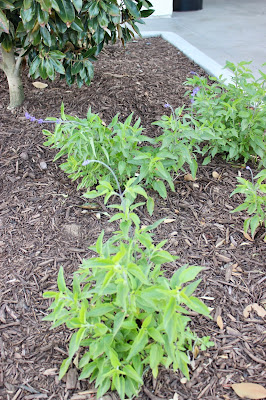 Boxwoods, olive trees, and various plants (with primarily dark green leaves) are mixed throughout the rich brown bark at the restaurant.

Flowering plants are kept at a minimum here, but wait until you see all the wonderful flowers at the market place! 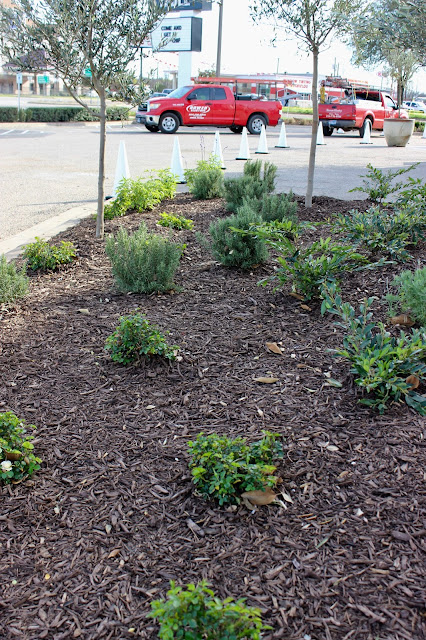 Around the corner to the left of the building below, there's an open dining area for sitting outside with a little side shop that sells pastries and juice. 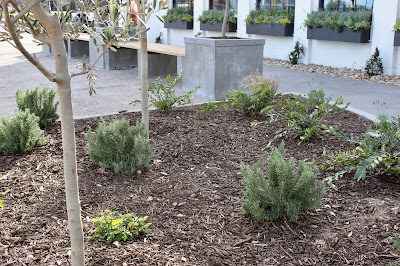 I would have gladly walked around and taken pictures of the open air dining, but a couple of security officers were giving me the evil eye...so I was happy to get the photos of the front before we were wisely on our way.

Here's an interesting article about Chip and Joanna when they were starting out broke and finding it difficult to pay their bills, and also talks about the effect their business success and TV show has had on the little city of Waco. See it here on Entrepreneur.com

Posted by At Rivercrest Cottage at Thursday, March 08, 2018

Email ThisBlogThis!Share to TwitterShare to FacebookShare to Pinterest
Labels: Finding Inspiration, Fixer Upper Fan, Out and about in Texas, Road Trips, Southern Fix