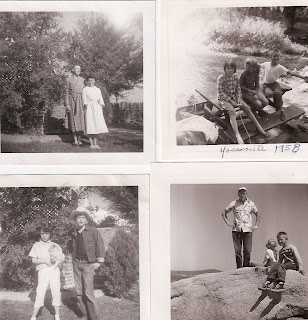 I'm the blond in the pictures above. While my sister and two brothers were looking else where, I'm the little one looking at my Dad. 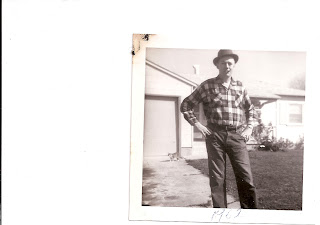 On January 18, 1994, Dad called me to say he was in the hospital. I left work and stopped at the store to buy a deck of cards. The Valentine's candy was on display so I bought a bag of red-foil wrapped chocolate hearts. The cards were to keep our minds off his illness, the heart candy was to offer his visitors.
That first night, we started playing what became a nightly game of Black Jack, his favorite card game. The heart candy became our poker chips. We split them up between us and when one person won them all, the game would end. Every night, I lost...Dad won every game.
One night I said, "Dad, some people actually let their children win a game or two!" Without hesitation, Dad replied, "Those people show their children how to be losers. I always tried to show you how to be a winner."
My father died just 2 weeks later on Feb 6, 1994. It seems like yesterday. At the memorial service, my aunt told me that when she and her sister visited Dad in the hospital, he asked them not to eat the chocolate hearts. When the aunts asked why, he told them the more candy hearts left, the longer the card game lasted and the longer I stayed with him each night. If I had known how he felt, I would've bought an extra bag.

In those early years after Dad died, Valentine's Day became something I dreaded. Every year in late January, when I turned a corner of the grocery aisle and saw the new displays of Valentine's candy, tears would run down my cheeks. But I always found the red-foil chocolate hearts, and I would keep them as long as I could.
Posted by At Rivercrest Cottage at Friday, February 04, 2011