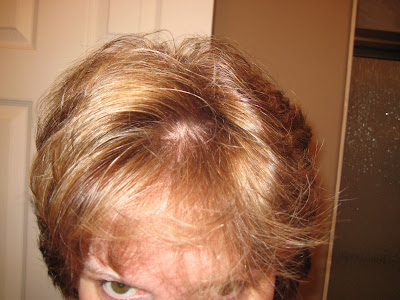 Last summer I got a really short haircut I didn't like, but I loved the hair coloring the stylist did so I took a picture of it to show it in the future when changing stylists. I planned to keep the picture in my camera for future reference. This plan, as most other things in my life lately, did not work out.

About a month ago, I went with Bill while he got a haircut. "Well, I'll just get a cut myself" I thought. Never a good idea, but with the life I've been living lately, I should have know better. So I get a haircut from hell. A few days later I went to California, due to Tori's death, and didn't have time to correct it until a few weeks ago.

Well, long story short, in correcting it I ended up with a haircut much shorter than the one above. I also ended up with hair coloring a dark brownish black color because either the stylist wrote the coloring codes down wrong or they got the wrong card. Who knows... but my backup plan of showing the picture failed because Jaysa downloaded all my pictures for me while I was up there for Ben's birth (she thought 155 pictures in the camera said time to save to my computer) and automatically deleted them from my camera. So when I tried to show the stylist my picture in the camera, it was blank...which should have been a sign for me, but I ignored it and plowed ahead!

My hair was waaaaay too dark, so I tried to highlight it, but I bought the wrong kit (Frost and Tip instead of Frost and Glow...I'm not making this up, check the haircoloring isle) and the hook thingy in it kept bending after only getting the front section done. So I gave up and went with just a front section, but left it on waaaaay too long and the highlighted hair looked white-white. Not a good look. I ended up looking like Cruella DeVille from 1001 Dalmatians.

Bill swallowed hard when he saw it and couldn't even put his usual good spin on it...just stared.

Hmmm...how to fix? Buy some reddish dye and hope it lightens the whole mess? Nope, that didn't work.

Hmmmm...buy a Frost and Glow kit and highlight all over? Nope, that didn't work because I didn't highlight enough, but it is better than the Cruella look!

I am going to just leave it alone and let it grow and fade enough for another stab at it, but this time I'm going to go to the best stylist in town (name and number given me by Gail the realtor) and stick with her so she can read the card right in the future. Meanwhile, I'm blaming this all on Jaysa for deleting my picture.

Yes, I know the picture can be put back into the camera, but if I could have downloaded them in the first place I would know how to put them back...wouldn't I?????
Posted by At Rivercrest Cottage at Wednesday, April 14, 2010

Email ThisBlogThis!Share to TwitterShare to FacebookShare to Pinterest
Labels: Miles of Style